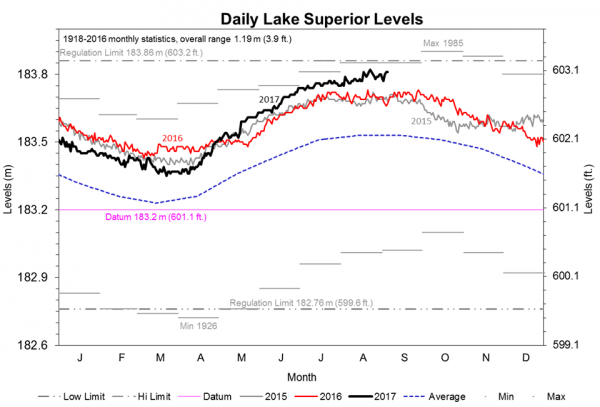 The International Lake Superior Board of Control, under authority granted to it by the International Joint Commission (IJC), has set the Lake Superior outflow to 3,130 cubic metres per second (m3/s) for the month of October, effective October 3rd. The October outflow is as prescribed by Regulation Plan 2012 and is expected to exceed the combined capacities of the hydropower plants on the St. Marys River, which will be approximately 2,122 m3/s in October. Most of the remaining flow will be released through the control structure at the head of the St. Marys Rapids.

The average St. Marys Rapids flow in October will be approximately 994 m3/s. Conditions will be similar to those seen during the summer of 2014. Therefore, anglers and other users of the St. Marys Rapids need to remain cautious of the high and changing flows and water levels that will be experienced in the rapids in October. Flooding of low-lying areas of Whitefish Island is expected to continue this month and some recreational trails and features in these areas will be inundated. Users are encouraged to use extreme caution.

written by International Lake Superior Board of Control