White River Forest Products is pleased to report that its donation of lumber has arrived in Houston to assist in the rebuilding of 111 Habitat for Humanity homes that were affected by Hurricane Harvey at the end of August. 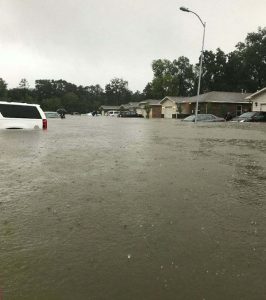 This is the flooded neighborhood. Nobody could get around the city during the flooding to show the height of the flooding and water at its peak. This photo taken by Habitat Homes for Humanity was the morning after; the water was at its highest level the night before.

The community-based Northern Ontario lumber mill quietly took on the challenge laid down by Resolute Forest Products, who donated a rail-car of lumber after Hurricane Harvey and asked other lumber manufacturers to follow suit. Frank Dottori, CEO of White River Forest Products (WRFP), spurred his team to mobilize and send over $20,000 worth of 8 foot 2×4 lumber to Houston to help rebuild.

Bob Schlaegel, a shareholder of WRFP, and the owner of Bedrock Logistics, based in Houston, donated the shipping, noting that he had family who were directly affected by Hurricane Harvey and was aware of the challenges of rebuilding. Bob Giroux, of Soanbert, WRFP’s marketing agent, contributed logistics and organized the transaction.

“When you put yourself in their shoes, it doesn’t take long to realize what you have to do,” said Dottori. “We’re proud of our product, and we wanted to help, so we made it happen…we hope this will turn up the pressure on other lumber companies to follow suit to help the people affected by Mother Nature’s rampages on both coasts, in Florida and in Houston, alike.”

Houston Habitat for Humanity is still in the process of gutting many of the homes flooded and destroyed by Harvey. Rebuilding should begin in a few weeks. 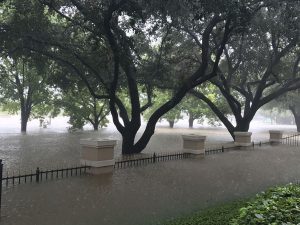 This is Buffalo Bayou, showing an 8 foot fence under water.

“This has been a very emotional time for many Houstonians and this donation of lumber will truly help raise spirits along with going straight to the affected areas,” wrote Matt Murphy, ReStore Manager, Houston Habitat for Humanity, in an email to the company. “Many are donating on a national level, which is great, but it is the donations going straight to the local level that have the fastest and largest effect. The city is coming back strong and we couldn’t do it without great partners like [White River Forest Products]. We sincerely thank you and everyone involved on this incredible donation of lumber.”

White River Forest Products (WRFP) is a community-based lumber mill that is owned by private investors, Pic Mobert First Nations and the White River Economic Development Corporation. Known for their high quality lumber, WRFP is located in Northwestern Ontario in White River, Ontario. WRFP reopened the mill formerly shuttered by Domtar in 2013, and now employs over 140 people. The goal of CEO Frank Dottori, who is also the founder and retired CEO of Canadian forestry giant Tembec, is to make WRFP one of the most efficient mills in North America. A multi-million dollar re-investment program is ongoing and the company is hiring. 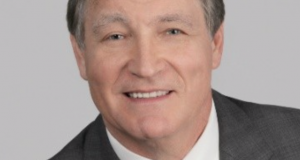 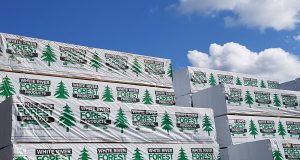 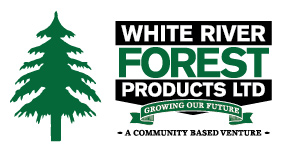