Red Pine Exploration Inc.announces partial results for three drill holes in the Minto Mine area that were completed as part of the on-going 20,000 metres (“m”) drilling program at its Wawa Gold Project. 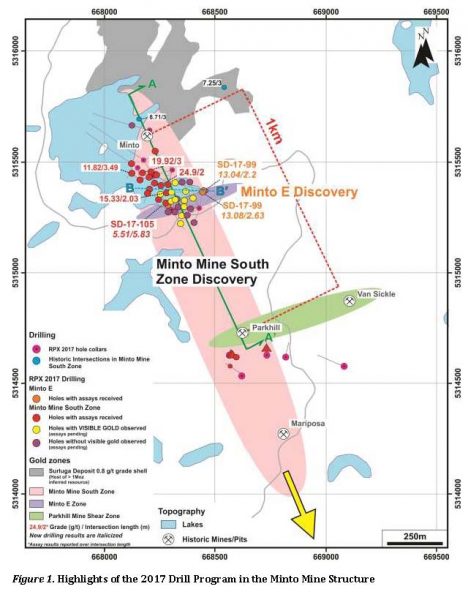 Quentin Yarie, President and Chief Executive Officer of Red Pine stated, “We are quite excited by the intersection of a near-surface high-grade quartz vein above and perpendicular to the Minto Mine South Zone. This new discovery, called Minto E, further emphasises the potential of the zone and adds another gold target to what is already a highly promising area. Drilling in the Mine South Zone continues to be successful and is demonstrating that thickening zones of gold-mineralization can occur within the structure.”

Table 1. Highlights of the 2017 drilling results south of the Minto Mine

Overview of drilling results in the MMSZ and the Minto E

Holes SD-17-94 and SD-17-99 (Final assays pending) were drilled to test the down-dip extension of the MMSZ and both holes successfully intersected the structure. Near surface, SD-17-94 and SD-17-99 intersected a high-grade quartz vein/structure that represents the down-dip extension of the surface exposure of the Minto E structure.

Results are pending for 20 boreholes in the MMSZ. The zone remains open at depth and along strike (>1km) to the south. Fifteen (15) additional drill holes are currently planned to further define its strike length and down-dip extension and to further define the Minto E Zone. 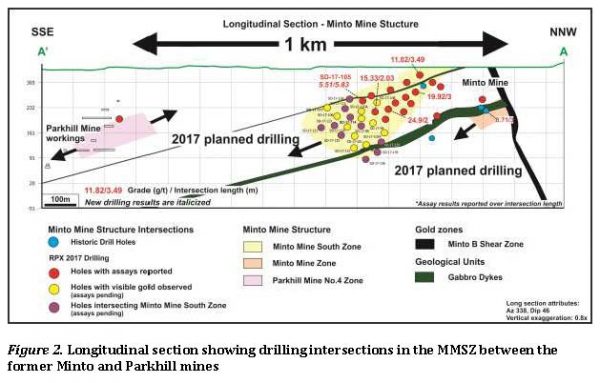 The Wawa Gold property package consists of over 5,500 hectares and hosts several former mines with a combined historic production of 120,000 ounces (“oz”) gold1. Currently, the largest gold deposit on the property is the Surluga Deposit, which hosts a NI 43-101 Inferred Resource of 1,088,000 oz gold at an average grade of 1.71 g/t using a 0.5 g/t cut-off contained within 19.82 million tonnes2.

Exploration work by Red Pine during the past 18 months has involved the sampling of 42,000 metres of historic core that was never sampled by previous operators of the project (initiated in February 2016) and aggressive drilling campaigns.

To date, the Company completed over XX metres of drilling and made four discoveries along the extension of the Surluga Deposit: the Surluga North Zone; the Hornblende-William Zone; The Minto Mine South Zone; and the Grace-Darwin Zone. All these mineralized zones are interpreted to form a coherent structural system, the Wawa Gold Corridor, and are anticipated to have a positive impact on the property’s gold inventory.

Red Pine’s on-going 20,000-metre drill program is focussed on three of the four key discoveries with two drills operating non-stop on the property. The first drill is currently targeting the Surluga North discovery, where Red Pine’s hole SD-16-45 intersected 14.66 g/t gold over 15.23 metres (the Surluga North high-grade zone) while the second drill is targeting the Minto Mine South Zone discovery.

The Company is well positioned to fund its share of the Wawa Gold exploration program. As such, the sampling and drill programs are expected to continue throughout 2017. 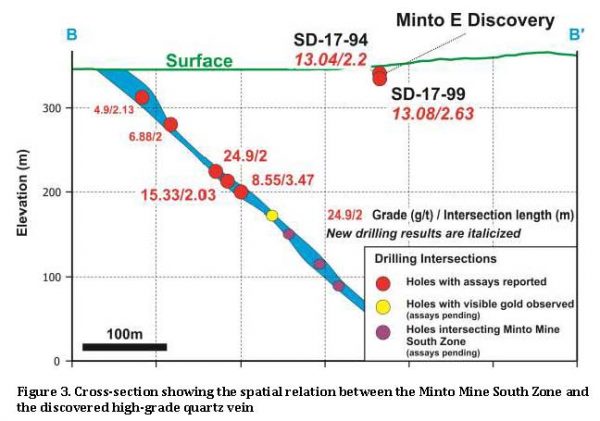 Drill core samples were transported in security-sealed bags for analyses to Activation Laboratories Ltd. in Ancaster, Ontario. Individual samples are labeled, placed in plastic sample bags and sealed. Groups of samples are then placed into durable rice bags and then shipped. The remaining coarse reject portions of the samples remain in storage if further work or verification is needed.

2NI 43-101 inferred resource of 1,088,000 oz of gold at 1.71 grams per tonne (g/t) using a 0.40 g/t gold cut-off grade for pit-constrained and 2.50 g/t gold cut-off grade for underground-constrained resources, contained in 19.82 million tonnes open along strike and at depth. The Cut-off grades are based on a gold price of US$1,250 per once and a gold recovery of 95 percent (Mineral Resource Statement, Surluga-Jubilee Gold Deposit, Wawa Gold Project, Ontario, SRK Consulting (Canada) Inc (effective May 26, 2015)).

Red Pine Exploration Inc. is a gold and base-metals exploration company headquartered in Toronto, Ontario, Canada. The Company’s common shares trade on the TSX Venture Exchange under the symbol “RPX”.

Red Pine has a 60% interest in the Wawa Gold Project with Citabar LLP. holding the remaining 40% interest. Red Pine is the Operating Manager of the Project and is focused on expanding the existing gold resource on the property.