Wesdome Gold Mines Ltd. is pleased to update drilling progress in the 300W area of its wholly-owned Eagle River Mine, Wawa, Ontario. 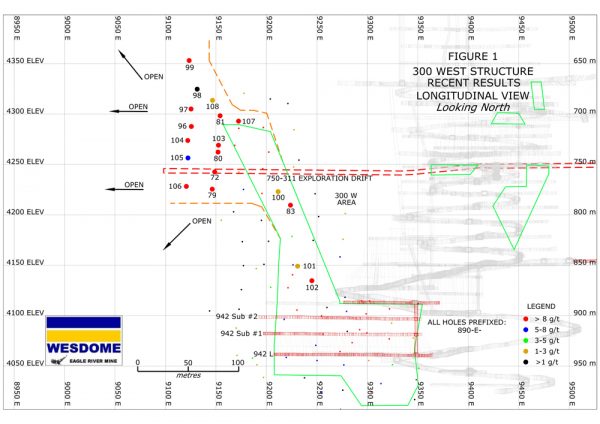 Complete new drilling data is provided in Table 1 with locations shown in Figure 1.

Duncan Middlemiss, President and CEO, commented “These new results are in a very desirable location with respect to existing development.  We are currently developing an exploration/access drive to this area on the 750 m level.  Expanding resources at shallower depth that remain open and easily accessible support our plan to open up new working areas and increase underground production.  Additionally, the grades of this 300 West extension are above the existing mine reserve grade which bode well for near term production.”

“The recent exploration success and near term potential of the Eagle River Mine parallel zones, which includes the high grade and above average width 300 E Zone, and the 7 Zone, have certainly given us cause to re-evaluate our near term plans. The 300 and 7 Zones are located north of the 8 Zone, which has been in production for the majority of the mine life and extends to the eastern extents of the mine diorite. Our focus will be to systematically explore for the presence of the parallel zones to the east with the goal of adding additional workplaces and increasing our production profile.”

The 300W area consists of steeply dipping, tabular, shear hosted quartz veins which occur in a quartz diorite stock near its contact with volcanic rocks.  The 300W remains open to the west and above as illustrated in Figure 1.

TECHNICAL DISCLOSURE
All assays are performed by fire assay on 25 gram aliquots at the Eagle River Mine assay office.  Duplicates, replicates and blanks are routinely employed to monitor quality control.  The technical content of this release has been compiled, reviewed and approved by George N. Mannard, P.Geo, Vice-President Exploration and “Qualified Person” as defined and required by National Instrument 43-101 “Standards of Disclosure for Mineral Projects.”