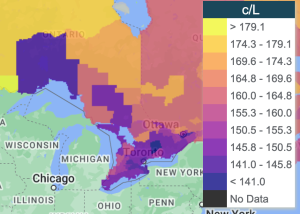 Lise Vaugeois, NDP MPP for Thunder Bay–Superior North, is calling on Doug Ford to put a stop to gas price gouging that leaves Northerners paying more at the pumps.

“Gas prices remain far higher in Northern Ontario than in the South,” Vaugeois said during question period Thursday. “In the Northwest, the average cost of gas was 30 cents more per litre than in the Greater Toronto Area. Even in the North, the price can range drastically from town to town for no discernible reason.”

Vaugeois said the provincial government should be regulating gas prices to bring relief to Northerners.

“Oil and gas companies, who continue to rack up huge profits, are gouging people in the North,” said Vaugeois. “Just ask the Minister of Northern Development who said last week, ‘I can’t explain the price variations in the North… it’s a bit of a Wild West phenomenon.’

“I am calling on the Conservative government to rein in the companies that are gouging drivers at the gas pumps in Northern Ontario.”