Running from the Russians 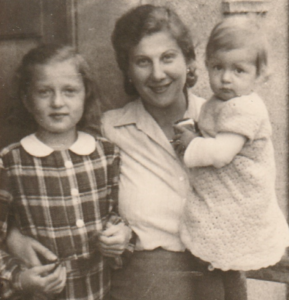 Seeing the horrific pictures of destruction in Ukraine evokes memories of my past in Germany, the end of the second war. We were bombed in Berlin and evacuated 60km north to a small village called Parlow, near the compound of the Minister of Defense where my dad worked as a security guard.

The year was 1944 most cities were destroyed, people hungry, cold and afraid to speak their mind. At least my little family had peace out there in the country and thanks to the small farms we could get a little extra food such as eggs, milk, etc, For me as an 8-year-old child it was heaven, after all the bombing the cold, hunger and darkness, running barefoot and free over the meadows, between the cows and chickens, it was paradise. But towards fall we could hear cannon shots in the distance and rumours had it the Russians are coming! Through the radio, we were assured by our slick “Reichspropaganderminister” “all conspiracy our boys are holding the Russians at the border”.

By January 1945 we could see and hear the next biggest city Stettin was burning and by February, the administrator of our little village ordered everybody to leave with what we could carry to be ready in an hour to leave. The Station wagon would transport us back to Berlin. We caught the last train out, were bombed at but ended up south away from the Russians and their reputation of brutality, pillaging and rape.

Mom, my toddler sister, and I found refuge in a little farm village where a kind family gave us a place in the attic of the house. We slept on straw, mom helped with chores at the household and at least safe, we encountered the end of the war: Spring 1945.

We had no knowledge of the world beyond, but we thought we were at peace, it was summer, we were warm, gathered what we could eat and one morning a deep rumbling woke us up. An American tank came crawling up the only street, almost to small for the humongous beast, with friendly soldiers peaking out of the top. Mom heard the war was over, Hitler committed suicide and the allies would take care of everything broken and destroyed.

For us kids it was exciting, the soldiers threw candies, chocolates and gums at us and tried to communicate with us skinny, hollow-eyed Germans. lnformation was spotty at the time since nobody knew where, what or who, but when slowly order established again, we heard that it was determined earlier in Yalta, with Stalin, Churchill, and Roosevelt, etc. Signing the peace agreement, Germany would be divided into four parts by the four allies.

With horror, mom found out we were given to the Soviets. The Americans and their enthusiasm had just ‘waltzed’ into Germany, and kept going, slowly the friendly candy throwing Americans backed out their tanks and left our area stunned in disbelief. I remember mom in shock, weren’t we running away from the Russians? Now, we were right where we were running from!

For a few days, everybody was subdued until the mayor put a white bed sheet on the church tower signalling ‘No Resistance’, and here they came! A howling drunk bunch of soldiers in olive/brown tattered clothes, in open Panje wagons drawn by small furry horses. They settled down in the little town square and kept celebrating their victory.

We huddled in the attic, and when mom had to get out to get us food, she did not look like my mom, she wore a long landlord’s coat, a shawl put over her dirty face and walked bent over. Not sharing too much with me as a 9-year-old but what I understood, plundering and raping was taking place. Word had it in their exuberance some Russians dismantled a flushing toilet
to ship to his homeland. Our beautiful, cultured Germany was now ruled by marauding creatures and it became clear we had to leave again.

But for now, we had to get out of our attic to find something edible. lt was early fall, potatoes were harvested and the greens and tops were burned on
the fields. What a feast it was to find in the ashes of forgotten potatoes. This day we found a few of these already cooked delicacies and dirty and tired we trotted home. Mom with a handful spuds, and I pushed my sister in a stroller. We still had a long way to go but when a Panje wagon stopped and one mature Russian male gestured invitingly to give us a ride.

I don’t know what mom was thinking but we were dirty, thirsty, totally exhausted and mom nodded yes. He looked friendly and swiftly the stroller was uplifted with my sister in it and mom and I climbed up, sitting beside him. He made an effort to communicate but mom pretended to be deaf. The little horses’ hoofs created an almost sleep-inducing sound, when suddenly the Russians stopped (uh oh) and pointed up in the trees in the alley, we were travelling in. He stepped on his seat and reached at a branch which was full of plums (the whole alley was full of plum trees). He picked all he could reach and put it in my apron.

By then my mom had her clear sense and motioned to the Russian, that we wanted off the wagon. Russian/German language back and forth, in the end mom won and he lifted the stroller down and helped mom and I off the wagon. As he reached out for her hand, he noticed my dad’s watch on her wrist and mom heard the word “URI” which meant roughly translated clock, or maybe he wanted something else. As he started to fumble it
off, mom spontaneously slapped his hand and said loud “Nix uri” the surprise was all over his face and, shock on ours; but he climbed back on Panje wagon and went.

Much later mom realized in what danger we were at that moment and why it was still so vivid in my memory, because of eating the plums on an empty-shrunken stomach, we three were sick for days.

Years later my mom talked often about that moment but explained it logically, since my dad was in a prisoner of war camp, his watch was the only thing she had left of him and did not want a bloody Russian to have it.

Things started to settle, and borders were finalized loosely and before they were sealed permanently, mom had to make a move. Late fall, we left our attic, mom had bartered to get a small hand wagon for our meagre belongings, and I pushed my sister in the stroller and a backpack on my back. We headed west where mom found was a Red Cross set up to register and treat refugees.

The tiny village named Helmstedt, right on the border between east and west became a rescue and lifeline for thousands. How we got there is blurry in my mind. We walked a lot for hours and days, slept in fields or barns, ate what mom begged for and what we scrounged or stole from gardens. The closer we came to the checkpoint, the more people were on the move creating a convoy which made it kind of orderly.

Some had big,,-loaded carts or crates or carried what they could. we could see already one day the border, lots of Russian soldiers, a little shed and the
gate or beam to let people through after checking their passports. Suddenly we heard shots and the word “STOY” and everybody left their stuff and hid in the ditch.

Later we found out the guards found alcohol amongst their belongings. Closed the gate for the day and got drunk. A lot of shouting and howling followed while we huddled scared and cold in the ditch. The next morning the convoy started moving slowly. As we came closer to the gate, we kept our eyes down, past the controlling guards with their guns, mom kept whispering “girls keep quiet and don’t look up” and then we were in
‘no man’s land’. 100 metres of neutral space and at the end was freedom, the English occupied land.

We were escorted to a large cross tent, where mom registered us. We were de-liced, roughly checked by nurses, got a small ration of food and advised for transportation to our destinated places. Mom choose Westfalia where dad had distant family ties.

Ukraine, My heart aches with you