Alamos Gold adds an EV to Matachewan Young-Davidson Mine 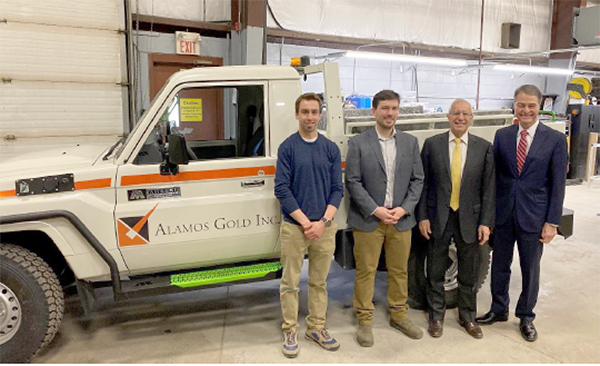 Miller Technology is pleased to announce the first sale of its new battery electric utility vehicle for mining to the Young-Davidson Mine of Canadian mining company Alamos Gold Inc.

“This is a great day for Miller, for North Bay, for Northern Ontario and for Canada,” said Dan Bachand, the CEO of Miller.
Also joining the press conference at Miller was the Member of Parliament for Nipissing—Timiskaming, Anthony Rota, the Member of Provincial Parliament for Nipissing, Vic Fedeli, and the General Manager of the Matachewan-located Young-Davidson Mine, Léon Grondin-Leblanc.

“Miller Technology’s electric vehicle is a prime example of how Canada is leading the world in green technology, reducing operating costs, reducing greenhouse gas emissions and most importantly improving employee health”, said Anthony Rota. “We are proud to see them serve the world from North Bay in the riding of Nipissing-Timiskaming.”

“Ontario is a leader in EVs and Miller is at the leading edge of EV utility vehicles,” said Fedeli. “We’ve said that the North will become an integral part of Ontario’s Driving Prosperity strategy and this is another big step.”

The utility vehicle is driven underground to safely move mining staff around the mine site. Historically, these utility vehicles have had diesel engines, which emit greenhouse gas emissions and impairs underground air quality. Miller has developed a conversion kit to exchange the diesel engine for an electric motor, in addition to a number of other mining-specific modifications to the vehicle. These vehicles are often run 24 hours a day, a very heavy duty-cycle, and Miller has patented certain aspects of its IONIC Drive system. Prior to releasing this BEV conversion, Miller had already built a new ground up utility vehicle called the Relay.

“With our original build Relay, BEV conversion kit and new projects such as an E-grader, the Ionic Drive System that Miller has developed has arrived at the top of the battery electric heavy duty-cycle drive systems. I want to thank our team members for their hard work. All of our staff have helped get us to this point”, said Bachand.

The sale to Alamos Gold follows a series of very successful mine trials.

“I want to thank Alamos Gold for their courage and commitment to battery electric vehicles and emissions reductions”, said Bachand. “This is a great step forward by Alamos Gold to reduce diesel fumes and emissions, helping with employee health, fossil fuel reductions and to slow global warming.”

“Today is an important milestone as the purchase of this electric utility vehicle from Miller Technology supports our efforts to reduce greenhouse gas emissions,” said Grondin-Leblanc. “The Young-Davidson mine’s emission intensity is less than half the industry underground mine average as a result of increased electrification and automation of our lower mine infrastructure which we completed two years ago, and today’s announcement is yet another step forward.”