Manitou Gold Inc. is pleased to provide an update of its exploration activities on its 350 square km Goudreau Project located north of Wawa, Ontario.

The Company is currently in the midst of a comprehensive exploration program, including soil geochemical sampling, induced polarization, and ground magnetic surveys, prospecting and geological mapping along the western 10 kilometers of strike length of the Baltimore deformation zone (the “BDZ”). The program is designed to enhance targeting and generate drill targets for the next phase of drilling, which will consist of approximately 18,000 metres. 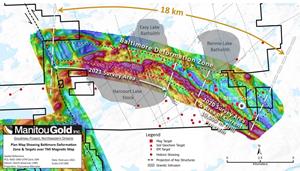 The eastern half of Manitou’s Goudreau Project is centrally located over an 18 kilometre of strike length of the BDZ. Geological and geophysical interpretation indicate that the BDZ is the eastward fault offset continuation of the Goudreau-Localsh Deformation Zone (the “GLDZ”)s, which hosts Alamos Gold’s (TSX:AGI; NYSE:AGI) Island gold deposit and Argonaut Gold’s Magino deposit, in addition to a number of smaller-scale past producing mines, including the past-producing Cline and Edwards mines. As such, the Company considers to the BDZ to have the potential to host similar gold deposits to the GLDZ.

Ground magnetic data acquisition and soil sample collection are expected to be completed within the coming days. Preliminary results, received in the form of detailed magnetic maps, reveal several prominent structural features that can play a major role in localizing gold mineralization. Interim IP models and partial soil geochemistry results received to date have defined numerous anomalies that are coincident with structural targets and considered priority drill targets for gold mineralization. Due to revised timelines for the completion of the Alpha-IP survey and the delays in turn-around times of the soil sample analysis, the Company has revised the timelines for the commencement date of the next phase of drilling to early August 2021.

“We are seeing the culmination of four years of property acquisition, regional exploration and detailed targeting along the highly attractive Baltimore deformation zone,” stated Richard Murphy President and CEO of Manitou Gold Inc. “The 18,000 metres of drilling we will be commencing in early August is going to be targeting elephant sizes gold targets in proven elephant gold deposit country. Our exploration team is doing a fantastic job in the field in order to refine individual drill targets.”

About the Goudreau Project

The Goudreau Project is located 50 kilometres northeast of Wawa, Ontario and is underlain by Archean-aged rocks of the Michipicoten Greenstone belt. The project area is traversed by several broad-scale deformation corridors (such as the BDZ and GLDZ), which host the majority of the important regional gold deposits and showings in the region.

As an eastward trending fault offset extension of the GLDZ, which hosts two multi-million ounce gold deposits and has seen over 1,000,000 metres of drilling for gold, the BDZ has been extremely under-explored along its 18 kilometre long trend, with only 4,400 metres of historic gold drilling.

Manitou’s key strategic shareholders include Alamos Gold Inc. at 19.9% and O3 Mining Inc. at 9.9%, each individually calculated on a partially diluted basis.