Weather starting to Change to the West 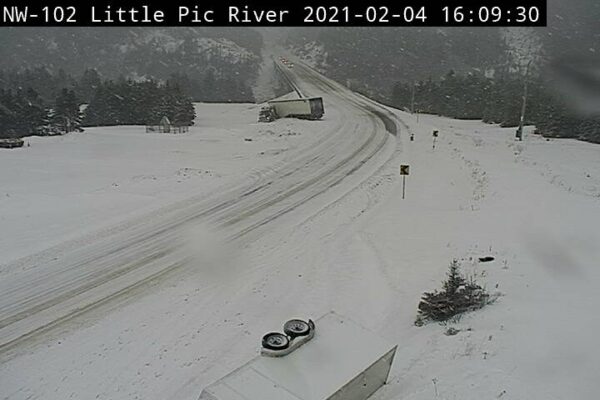 Environment Canada has been warning of snow becoming heavy this evening into tonight.

The snow has begun to the west, and road conditions are starting to deteriorate.  There is a transport split between the ditches by the Little Pic River, and in the Rossport area there are three different incidents: west of Rainbow Falls (Rossport) the westbound lane is partially blocked due to a collision; and at the bottom of Cavers Hill, the westbound lane is blocked due to a jackknifed TTU; and Rossport, at distance marker 728 one lane is blocked due to a jackknifed TTU. Highway 17 seems to be rather clear from White River to Wawa, but be aware that road conditions may change suddenly.

Snow has begun towards the west and will increase in intensity this evening into tonight. The snow will ease in intensity Friday morning before ending later in the day. Total snowfall amounts of 20 to 30 cm are likely by the time the snow comes to an end.

Travel conditions along Highway 17 between Nipigon and Wawa will likely become hazardous due to accumulating snow and very low visibility. Motorists should consider changing travel plans accordingly. Wawa is expected to receive lesser amounts than areas farther west along the shore of Lake Superior.