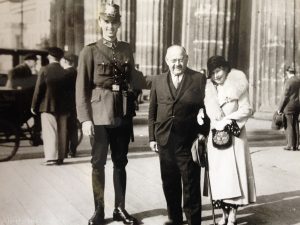 Before Dad was married, here he is as a young policeman in front of the Brandenburg Gate with the Chief Editor of the New York Times and his wife. (August 31st, 1931)

It was February 7th, 1945, late at night when the village elder, Herr Moeller gave us the order to be ready to leave within two hours, with only what we wear or carry, “The Russians are crossing the River Oder.” For weeks, we could hear the foreboding bombings in the distance but were assured by the officials not to worry “Our boys” on the front were digging in and fighting the advancing Red Army back. In a few weeks, all the misery like bombing, rations, hunger, freezing and living in the dark would be over, if, no when, Germany wins the war.

For a scared child, that sounded wonderful. If only it was true, and only if my parent’s worried faces would not leave any doubts otherwise. And now the order to leave, women and children – the men were on duty somewhere. My Dad was assigned to a highly secretive service to protect Ministers and diplomats, foreign visitors and dignitaries. Only the best and bravest belonged to that elite few.

We were bombed out in Berlin, but thanks to my Dad’s privileged position, we could live in the countryside, safe from further bomb attacks, and Dad, closer to his place of duty (the Minister of Air Defense, H. Goring in Karin Hall). And now, we were cramped in a small van with other women and children of staff members. We shivered, some cried from the severe cold and uncertainty. Now we could hear the shots of cannons in the distance and saw the fire shine on the horizon, Stettin was burning!

Mom left a message for Dad with the driver, we would try to make it further west, perhaps to Thüringen, where Mom when a child was billeted in a small village. The drive in the dark ended after two hours at a train station in Berlin. I guess it was the only one still standing and partly operating. It was wall-to-wall people, everybody wanted to flee, but to where? Just away from what was coming

Berlin seemed to be the target to completely disintegrate the town. In all that commotion, the alarms were sounding. An air attack was imminent. Mom took my 3 year old sister and me under a huge stone staircase and covered us with her body. We could hear the whistling of the bombs and the deafening hit nearby. The ground was shaking under us. I was nine years old and knew only darkness, cold, hunger and misery; running for our lives.

Who can explain to a child the wheeling and dealings of politics, power and might? In the end, war is so senseless and doesn’t solve anything but creates horror and loss to the innocents and the defenceless. But to get to that conclusion, it came only many years later.

At this moment, we endured on of the last and brutal air attacks, only to be almost squashed in the onslaught afterward while trying to get a place on the waiting train.

It was pandamonium – pushing and screaming people. I held onto my toddler sister in her tiny stroller, calling for my Mom, who was weighed down with some of our last measly possessions. It was horrible! Somehow we made it up the two steps of a train compartment. We were so overfilled that it was almost impossible to close the door before the whistle sounded for the locomotive to leave. We were holding onto each other in that now sticky, sticky, small space between two compartments.

As night turned into dawn on February 8th, the even chucking of the engine was hypnotic, and many people slept standing or slumped over bags and each other until the shriek of the engine brakes woke us up rudely. Somebody yelled “Tiefflieger!” We were being shot at by low flying planes with machine guns! Everybody scrambled under the train for shelter. I was lying on the ties between the rails with my sister, and Mom on top of us. If we were hit, we would all die, according to my brave mom. In my naive child’s mind, I asked myself what did we women and children do to be hated and hunted down mercilessly?

After the attack, half frozen with blood and bodies around us, Mom pulled my kerchief tighter over my face, and said “Kati, don’t look. Just hang on to sis and my coat” We squeezed back onto the train and with shot out windows, the trip became almost unbearable. We huddled more together and used our few bags to cover against the cold. A few glances outside showed us nothing but devastation. Our beautiful Germany was in ruins, heaps of burned out rubble. Again, in my nine year old mind, “Why?”

We finally made it to the western part and ended up in Thüringen, and then the days melted into the next. We still saw squadrons or formations of bombers flying overhead to or from unloading their deadly cargo, but we were safely away from target cities.

Eventually my Dad, on his bicycle joined us. It must have been April by then. He was much thinner and rumour had it that Hitler had committed suicide before the Russians conquered Berlin. I remember seeing tears running down my Dad’s face — the only time I saw my father cry.

Communication, like radio or newspaper, was nil; but by late Spring, we heard rumours again. Germany had capitulated and soon American tanks came running down the only road in that village with smiling GI’s, mostly black ones, throwing chocolate and candies to us, children. What a treat for us kids, having not even the basics for a long time.

A few days after the tanks had settled in, heavily armed MP’s (military police) in an open Jeep, took my Dad into custody. the “Nazi Cleansing” had begun and Dad was considered a big “Nazischwein” because he protected the upper echelon, if necessary with his life. How absurd! Would I ever see my beloved Dad again? A few days of uncertainty hung in the air. the candy throwing Americans with their tanks, retreated slowly, and the rumour mill went into overdrive. “Were the foreign tanks here by mistake? Did they get lost? Did Germany win the war after all?”

Nobody knew until one morning, a white bed sheet hung from the church tower and the eerie quiet was interrupted by cajoling Russians in open horse-buggies speeding down the village dirt road.

Mom was horrified. Were we not running from the brutality of the primitive Bolsheviks all along? And what would happen to Dad? Would he, as a political prisoner, be handed over to the Russians?” That would mean that we would never see him again.

Siberia meant death by brutality and starvation. Meanwhile our little village was free to ransacked, pillaged and brutalized, with no resistance. We endured more hunger and hardship for the next weeks, but that is another story.

Only many years later, in school during history lessons, did I learn that while we were running for our lives, the end of the war was officially declared somewhere (I think it was in Reims), signed by all four allies, May 7th, 1945. But Germany’s fate was already determined in February 4-11, 1945 in Yalta by Stalin, Roosevelt and Churchill. Like a piece of cheese, divided into French, English, American and Russian territories; and we ran into the worst part unknowingly.

The whole world declared after that ‘No More War!’, but look around. Why do we not learn that war does not solve anything but creates more misery for the innocent?