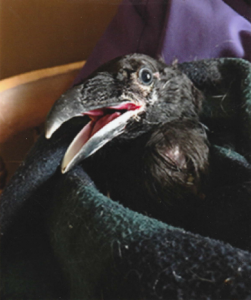 My granddaughter, Katie had to leave the dorm of the university due to COVID-19. By the time she was settled in my house, it was May 2020… a cold rainy day with ravens making a lot of noise in the backyard.

I knew I had a nest in my tall spruce trees, but why the noise? To get attention? For sure not human attention, or? A warning or emergency call to their baby? Of course, the little guy was sitting on the 5-foot wooden fence between the right neighbour who has a young dog, who must have thought: Yippee! It moves, I want to play with it! This fledgling able to flutter must have ventured out of the nest and sailed down but could not get up again. The parents were not too far, coaxing it to fly… but, it could not.

The little guy was ‘parked’ on top of the fence for hours and eventually, he must have fluttered down and disappeared in the underbrush in my backyard. I could tell where he was – every time I showed my face, the squawking of the protecting parents greeted me. Over the next few days, the little guy made progress by hopping and fluttering onto low tree branches until he bravely made it onto a 5-foot wire fence to my
left neighbours’ yard… and into it!

But there was no protection in the form of bushes or high weeds. Behind there was the ballfield with nowhere to hide – open for predators to attack! I spread out my ‘wings’, encircled him, and forced him back over the wire fence into my big bushy yard. Even with his loud protesting parents, this happened every few days – He wanted to fly but couldn’t (I think that is where the expression ‘bird brain’ comes from). Until the 4th time, it was especially windy and cold that day and the little guy looked so bedraggled that my protective instincts kicked in and my rescue turned serious.

Since chasing him back to the safer ground did not teach him anything and flying was still not possible, I took a blanket and ambushed him under the protesting adults. Katie watched from inside. Now I had him safely, wet and scrawny in my arms. Now what? (I can hear nature people: tisk, tisk, you should not interfere; Mother Nature takes care.) Mother Nature is also sometimes cruel and this raven would not have survived.

Now in my warm blanket, he was quiet, maybe still in shock and my granddaughter could examine him closely. Because of the soaked feathers, he was almost naked. His eyes had still the blue circle that baby ravens have and the yellow edging on the side of his beak, a soft coating covered half of his upper-beak, we assumed he was a ‘preemie’. I expected he would fuss and peck us when we offered him some food, but to our surprise, he took it gently. 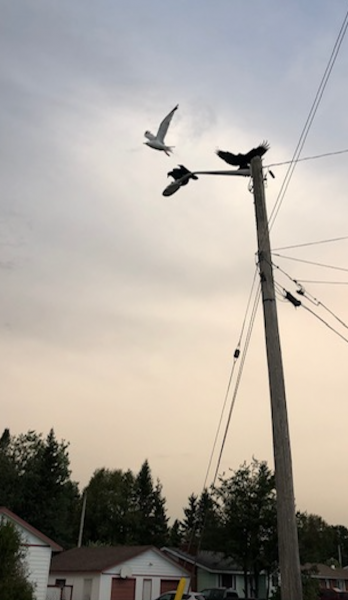 For now he was warm, fed, and content… but I could not hold him forever in my arms. Who has knowledge of wild critters? And how to take care of them? Only Lise, my neighbour across the street came to mind. She had helped many creatures back to health over the years. She instructed us to let him go in my backyard – the parents would feed him. But I was not willing to chase him back to safety every time he ventured back into the open while unable to fly.

We compromised by putting a big dog cage with blankets and a box to hide in my backyard. We covered three sides to protect him from the wind and rain and kept the front open so he could see his parents and they could feed him too. It worked. We provided also some ground beef and gave him time to recuperate and build up his strength (and grow some feathers).

By now, Katie had given him a name since he was now family – hatched in the back yard. She said Biscuit would suit him (or her). A few days in ‘jail’ or maybe an ‘all inclusive’ stay with rest and extra ground beef, a small miracle – Biscuit wanted out. So, we carefully opened the gate and watched his progress from the bedroom window. Biscuit was preening, hopping, and soon fluttering under the guidance of parents to a branch and then to another one.

Every day we put out a little food, which he took (or the mother) because he was still not self-sufficient. Then one day we saw him flying – not fluttering anymore from one branch to a higher one. Biscuit ventured soon from trees to handrails and decks and (did I make fun about birdbrains?) he pecked once on my big picture window… Katie witnessed this brazen event from inside and couldn’t believe it.

I could distinguish him from the other ravens for a few weeks by his yellow membrane on the side of his beak and his scruffy appearance – there was always a feather sticking out, just like a street kid with torn pants and uncombed hair. But now he is one of them, flying with the big guys.

He is still hanging around the house and the first brave one to come close when I call ‘Biscuit’ for a treat. Meanwhile, he made friends with a young seagull and shares whatever scraps I give them once in a while. When Katie left that last weekend in August to go back to University, Biscuit and seagull were sitting on top of the street light post as if to say “Goodbye to her.

This little rescue story brought me a lot of head shaking and criticism from friends and acquaintances: “Ravens are mean! They kill baby birds, raid nests, get into garbage”, and so on. Isn’t that the circle of life? Cats eat mice, birds – chipmunks, foxes, wolves, coyotes eat cats, dogs, rabbits. We humans are the worst ones. Just think what appears on your dinner table… Much is written about the wisdom of the ravens, just look it up on your computer. 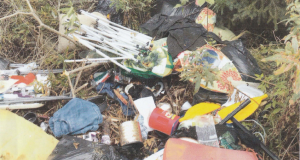 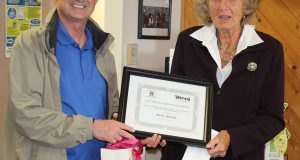