On September 9, 2020, at approximately 3:15 a.m., members of the Superior East and Marathon Detachments of the Ontario Provincial Police (OPP) responded to the report of a train derailment and fire just west of White River.

Highway 17 was closed for a short period of time as a precaution while the situation was assessed. Upon police arrival, it had been discovered that a train car carrying wood products was on fire and that the train was still on the rails. 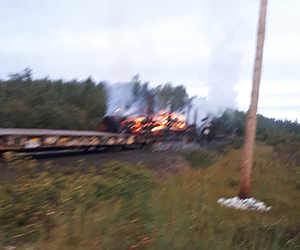 Railway crews were able to relocate the majority of the unaffected cars to other locations. The White River Fire Department and Ministry of Natural Resources and Forestry fire crews were called upon to assist with extinguishing the fire.