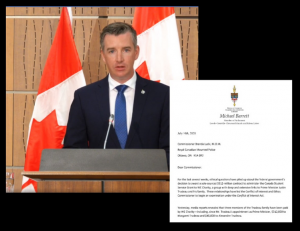 Conservative members of the Standing Committee on Access to Information, Privacy and Ethics have called for an emergency meeting to discuss Justin Trudeau’s $900 million scandal and to review the safeguards that are in place to prevent conflicts of interest in government procurement.

MPs Michael Barrett, Damien Kurek, and Jacques Gourde today sent a letter to the Clerk of the Ethics Committee requesting the emergency meeting.

At the emergency meeting, Conservative MPs intend to put forward the following motion:

That, pursuant to Standing Orders 108(3)(h), the Committee review the safeguards which are in place to avoid and prevent conflicts of interest in federal government procurement, contracting, granting, contribution and other expenditure policies; and that, to provide a case study for this review, an Order of the Committee do issue to Speakers’ Spotlight for a copy of all records pertaining to speaking appearances arranged, since October 14, 2008, for Justin Trudeau, Sophie Grégoire Trudeau, Margaret Trudeau and Alexandre Trudeau—including, in respect of each speaking appearance, an indication of the fee provided, any expenses that were reimbursed and the name of the company, organization, person or entity booking it—provided that these records shall be provided to the Clerk of Committee within one week of the adoption of this Order.

“Revelations that Justin Trudeau’s family was paid to speak at events for an organization, which later received a $900 million sole-source contract, are deeply disturbing,” said MP Barrett. “This new information has raised concerns about the way this Liberal government operates and whether the appropriate processes are in place to avoid conflicts of interest.