Lighting it up for Eddy tonight! Let’s Roll!!

An incredible tribute to Eddy K. Lefrançois in Dubreuilville tonight. A man who lived his life to the fullest and beyond was remembered tonight with 398 ice candles. The ice candles were sold for $10 as a fundraiser for Eddy’s cause – ALS Canada and 252 were sold!

At 7 p.m. tonight despite the bitter cold, the ice candles were set out, a tealight placed in each one, and lit. They encircled the Church and lit the snowbanks and path to the Church. 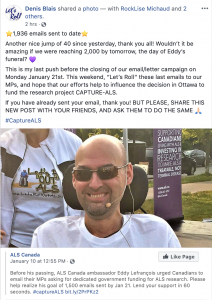 There is still time get your email out – http://als.good.do/captureals/emailyourMP/

Gretchen said in a facebook post Thursday, “Sometimes the craziest ideas turn out amazing. We will be donating over $2300 to ALS from everyone who donated for an ice lantern! We will light up the way tomorrow evening! I know Eddy loved Lets Roll….now I say; Roll on Eddy!!”

Eddy’s funeral will be tomorrow at Église de Sainte-Cécile in Dubreuilville. The gathering will begin at 10 a.m., with the service at 11. Eddy as asked that everyone bring their smile, no black clothes – Let’s Roll!! clothing, purple or hockey jerseys. No flowers either, but donations to ALS Canada or to Église de Sainte-Cécile. There will be a table at the church to receive your donations, or online at www.als.ca/eddy. There is a memorial reception lunch at the High School Gymnasium after mass. At 4 p.m. there is a Memorial Hockey Game at the Dubreuilville Arena. 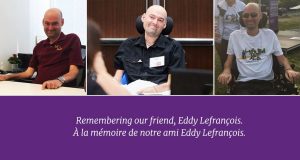