o Step-out drilling will continue until mid-December and has been successful extending mineralization on strike and down dip at both the Middle and Wolf Zones.

o DownholeIPtargetsarebeingdrilltestedwiththeobjectiveofextendingtheMiddleZoneonstrikeand testing convergence of the Middle and Wolf Zones at depth.

o Deep drilling below the Sugar Zone is also underway, and will test down dip mineralization. 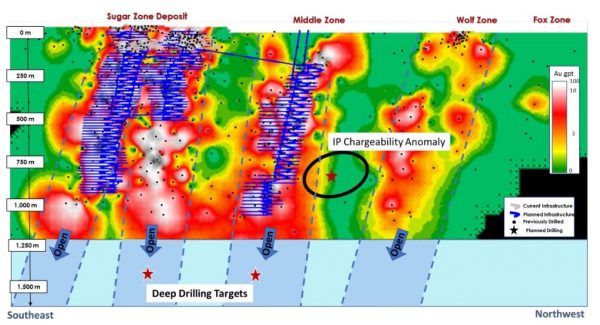 Process Plant commissioning began in August following completion of construction. Since that time the Company has increased throughput to achieve the initial targeted rate of 575 tpd.

Sill development is on-going and long-hole stoping between the 140 and 155 levels off the Sugar Zone South ramp has begun. The first production stope blast was successful and the results met expectations in terms of rock fragmentation.

Underground development continues at the Sugar Zone North and South ramps. During September, the average advance rate of 8 meters per day was ahead of plan. The installation of critical underground infrastructure to support ventilation, power and pumping has been completed. In addition, the mine return air ventilation fan was successful installed and the transition to grid power for the majority of site power requirements substantially completed. Redpath is ramping up its underground mine personnel to achieve targeted sill development rates. Harte Gold’s current permits allow for underground mining and mill processing rates of 550 tpd and 575 tpd respectively. Harte Gold will submit an application to increase both categories to 800 tpd in Q1 2019.

Infill drilling at the Sugar and Middle Zones for 2018 has concluded. Approximately 62,000 meters was drilled with a focus on the upgrade of Inferred Mineral Resources to the Indicated category. The drill program was successful and is expected to improve overall modelled grade of the Resources. Assays were published over the course of 2018 (see press releases dated July 23, 2018, May 23, 2018, March 18, 2018 and January 8, 2018). Assays will be factored into an updated NI 43- 101 Mineral Resource Estimate targeted for early 2019.

Step-out drilling underway will continue to mid-December. Approximately 30,000 meters has been drilled to-date, targeting extension of known mineralization at the Sugar, Middle and Wolf Zones, as well as discovery of new potential zones of mineralization like the Fox Zone.

Information provided from the Company’s downhole IP program completed in August has been successful identifying a number of drill targets, including a chargeability anomaly currently being drilled to test the convergence of the Middle and Wolf Zones, illustrated below. Downhole geophysics has been a highly successful tool used in the past, earlier work led to the deep Sugar Zone discovery at a depth of 1,000 meters.

The Company has also started deep drilling at the Sugar Zone, approximately 1,500 meters below surface and 500 meters below the current extent of Inferred Mineral Resources, illustrated below. The intent of deep drilling is to test continuity of mineralization down dip and to potentially follow up with further downhole IP to develop deep drilling targets.