Wawa-news took a drive around the area yesterday to see what happened after the rain of October 11th. Municipal Infrastructure staff worked extremely hard to keep the Harbour Road and the road into Michipicoten First Nation from washing out. Wednesday was devoted to keeping it safe, ditching and in one spot even creating a new place for the water to run to. Thursday was the day to begin repairing the damage that happened. Both graders from the Municipality and MFN were out adding new gravel to fill in the newly sprouted potholes, and rebuild the road edges that had washed away. 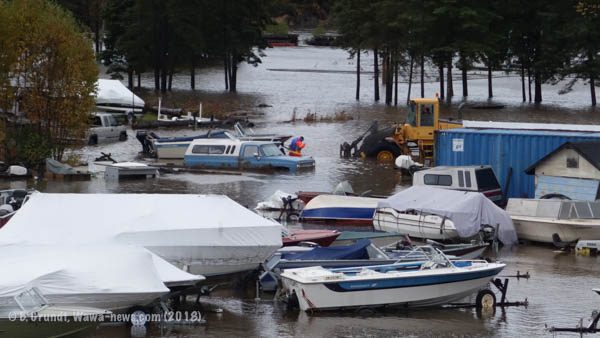 With the additional rainfall, the reservoir on the Magpie and Michipicoten Rivers were spilling additional water into the waterways. That posed problems at the Harry Mcluskie Marina and Buck’s Marina in the Mission. 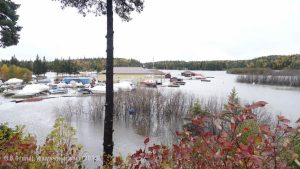 Not only did the basin fill with water, so did the parking lot and there was at least a foot of water in the showroom at Brad’s. Employees and concerned friends helped move stock and shift boats to higher ground as they waited for the water to crest.

The Michipicoten River was rising, and you could see that clearly as you drove over it. If you looked underneath the water was nearing the bottom of the bridge. With the additional water flow, the sandbanks were eroding, and finally yesterday afternoon the Michipicoten River broke though Dead River. Visitors at Kinniwabi Pines and Best Northern could see the normally placid water of the Dead River (an oxbow lake) become a churning mess of sediment-laden brown water. 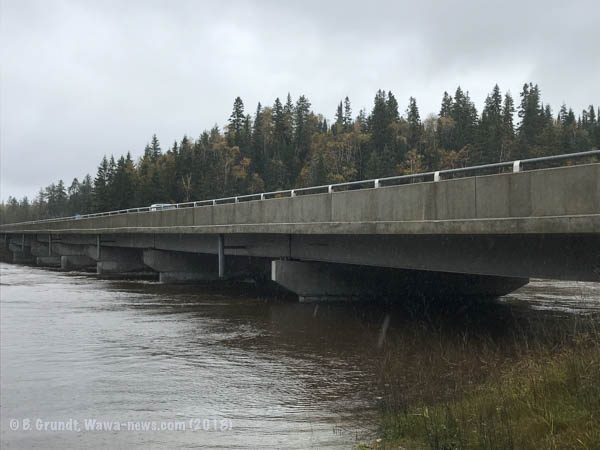 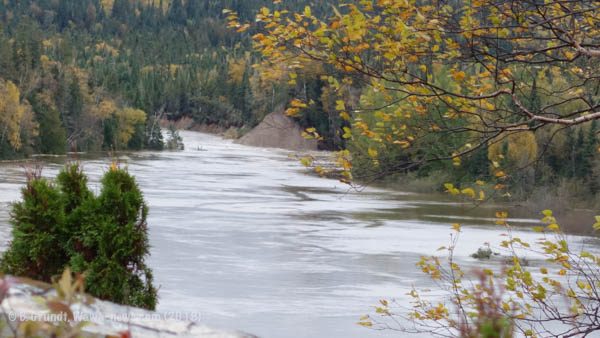 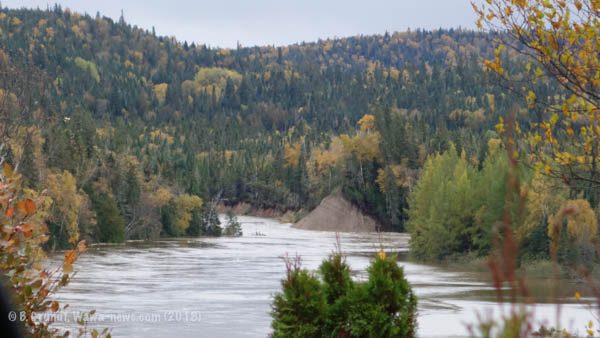 At the mouth of the Michipicoten River, the sandbar has blown out. An incredible amount of sediment can be seen streaming out into the blue of Lake Superior. There are trees, logs, leaves – all sorts of debris flowing down the rivers. One tree could be seen lodged against the light standard at the shoal guarding the entrance to the river. 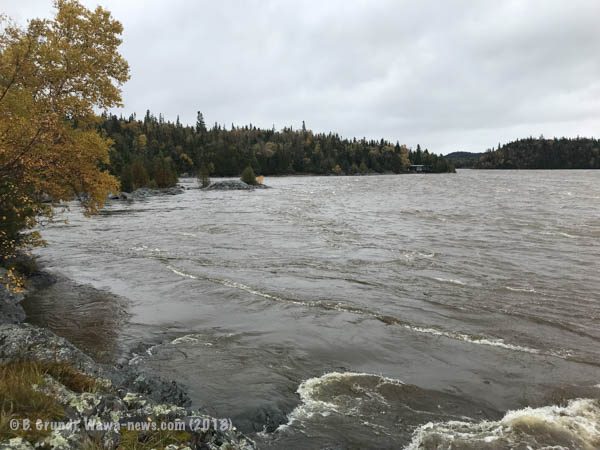 Silver Falls was just raging – greater than is normally seen in the spring. It was impossible to drive into Magpie High Falls. There was too much water for me to want to drive through and then get stuck. So the next spot was Steephill. 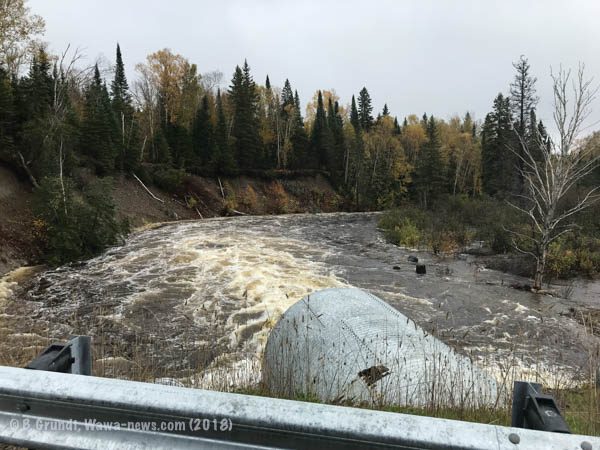 Along the Steephill Dam Road, Catfish Creek overflowed its bank in a huge way. Those who thought that the culvert that was placed there after the storm of October 25, 2012 was too big, will be relieved to see that that culvert was well used during this storm. There was so much water flowing through that perhaps two culverts should be there. At the Steephill Dam, torrents of water could be seen streaming down the spillway into the Magpie River. 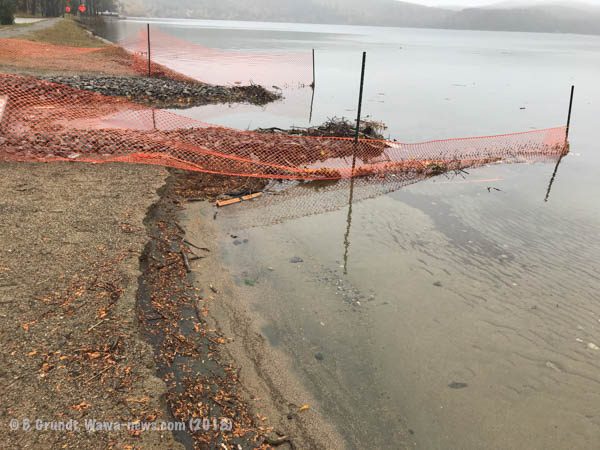 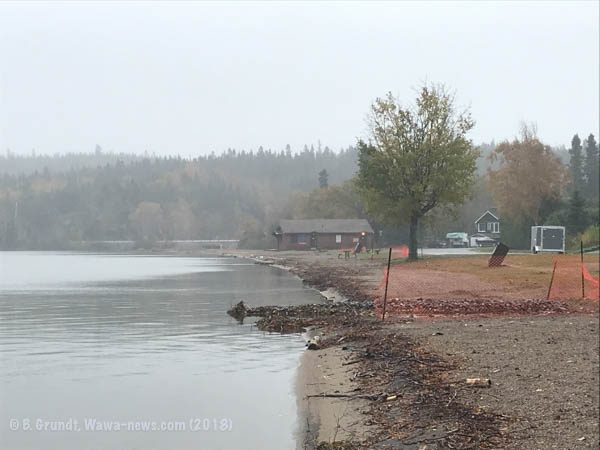 In town, Wawa Lake, a spring-fed lake was also overflowing its banks, because of the runoff from the hills around the lake. The beaches are easily a third of what they are normally. The new bioswales have disappeared into the lake. The northeasterly winds just tore away the beach sand, leaving debris in its place. The dock at Lion’s Beach is now a diving platform. Many old timers say that this is the highest that they have ever seen Wawa Lake. 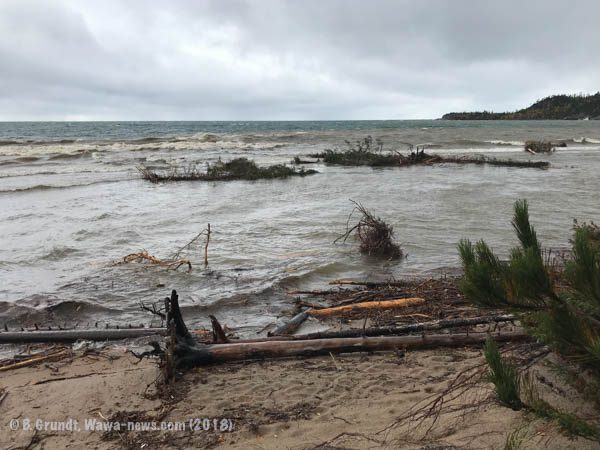 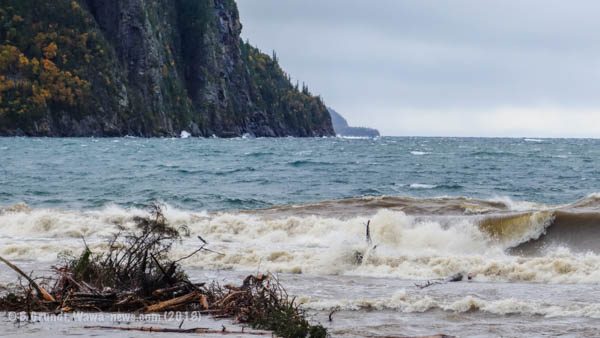 I took a drive down to see what that damage might be at the Old Woman River. In the storm of 2012, it changed course – it didn’t change back this time though. It was still eating away at the eastern edge of the parking lot. Here too there was a lot of sediment in the current, and many, many trees littering the water’s edge along the beach.

With all the rainfall, the ground is sodden beyond belief. If you head into the bush this weekend be very aware of soft road edges, increased potholes, and water over roadways concealing what is underneath. The Paint Lake Road has spots and long stretches where the water is over 18″ deep. Remember to file a flight plan before you head out, and be safe.