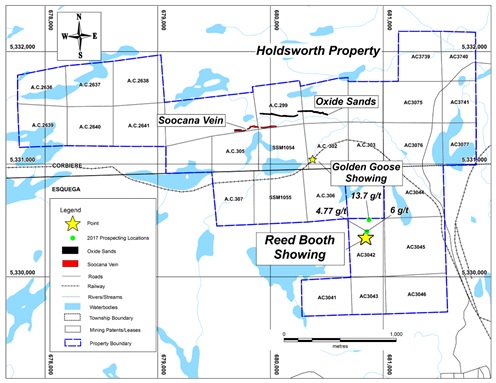 *Grab samples are selective and may not represent the true mineralization of the prospect.

Quentin Yarie, MacDonald’s President and CEO commented: “Confirmation of the gold-bearing structure associated with the Reed-Booth adds an additional exploration target for the Company. We will continue to prospect the area both for lode gold type targets as well as the extension of the oxide sands which represents MacDonald Mines’ goal of being a near term producer.”

The known gold mineralization on the claim is hosted by quartz veining localized within an altered (chlorite, calcite, sulphide, silica) and sheared intermediate to felsic intrusive rock. A grab sample from the vein system in the main shaft and adit area assayed 0.91 oz/ton, Au Two veins appear to intersect in this area.

Another shaft was located during this program (3 Shaft), 105 metres east- northeast of the main shaft. The vein system at the 3 Shaft is 4.0 feet wide, strikes at 076° and dips -85° towards the north. There is no outcrop in the area between these two shafts.

The 2 Shaft is located approximately 120 metres southeast along the baseline from the main Shaft. There is scattered small quartz veining developed in altered felsic rocks in this area, but no apparent vein in the rock exposed at the shaft collar. Between the Main and 2 Shafts, a 2′ to 3′ wide quartz has been exposed in an old trench. A grab sample from this vein contained 0. 26 oz/ton, Au. A sample from a vein in this area by earlier workers (Sears, 1986) assayed 0.12 oz/ton, Au.

Grab samples taken by the Ontario Geological Survey in 1981 and 1990 in the waste rock of the vein system also indicated a high gold content in the Vein #1, with individual grab samples containing up to 124.49 g/t gold and 33.86 g/t silver (OFR5798).

About the Holdsworth and Soocana Claims
The project is located near Hawk Junction, ~20 km north east of Wawa, Ontario, and in total, is comprised of 30 claims covering approximately 1142 acres. The Holdsworth claims consist of a contiguous block of 18 fee simple absolute patented claims, including surface and mining rights covering approximately 705 acres. The Soocana claims consist of a contiguous block of 12 claims that cover 437.3 acres. These claims are under a 99-year lease agreement with Josephine Forest Resources Ltd. that expires on July 31, 2039.

MacDonald Mines is focusing its near-term exploration program on the Oxide Sands. These appear to extend for more than 2 kilometres on the property as corroborated by MacDonald’s recent airborne magnetics results and reach a depth of at least 8 metres.

The soft and relatively unconsolidated Oxide Sands material can be extracted like an aggregate. The Company is working to better define the Oxide Sands as continues to prepare for their potential extraction.