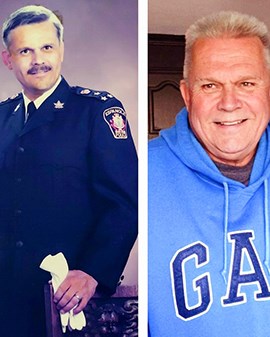 In loving memory of Raymond O. Freeman who passed away peacefully at home on August 31, 2021 with family by his side.

Ray was a dedicated Police Officer, spending most of his career as a Constable and Acting Sergeant in Wawa. He then became Chief of Police in Espanola in 1988 where he served as Chief for 21 years.

The family would like to thank Dr. Noble, Dr. Carleson, Dr. Linford from the North Eastern Ontario Cancer Centre as well as Dr. James McKay, Tracy Nadeau, Dominique MacLean, Ashley Moga and all of the staff at the Espanola General Hospital who took exceptional care of Ray.  Thank you to the LHIN and Bayshore for your personal care during our time of need.

In keeping with Ray’s wishes there will be a private burial followed by a Celebration of Life at the Espanola Royal Canadian Legion on Saturday September 11th, 2021 from 1:00 – 4:00 pm.  In lieu of flowers, all donations can be made to the Canadian Cancer Society.