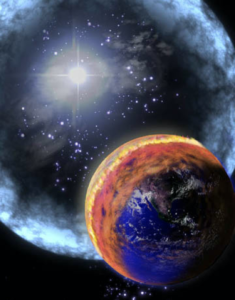 July and August are typically deemed the hottest months of the year in Canada. Nights can be warm and sultry making it difficult to sleep without air conditioning.  A term that you might have heard to describe this season of heat is the “Dog Days of Summer”. It begins in the first week of July and could last a couple of months. But where did this saying originate and what is the meaning behind it?

The idea was derived from the early Greeks and Romans who used the dog star – Sirius as part of their rationale. Sirius is only 8.6 light-years away and is the brightest star in our night sky, as seen on cold winter nights. However, at this time of year, Sirius and the sun both rise at the same time – sort of. It was thought that Sirius combined with the sun produced extra heating hence the name.

Because of its proximity to us, radiation generated in the sun travels through space and warm the molecules in the earth’s atmosphere. The stars we gaze upon at night including Sirius are much too far for us to feel their effects. Right now Sirius is still lost in the solar glare but the star will begin to reveal itself by the end of August low in the southeast sky before dawn. Over the year, stars rise four minutes earlier each night from the night before. This is why we see different constellations rise month after month.

There are very rare cases that a planet like the earth can feel the effects of a distant star. Gamma rays are the brightest electromagnetic blasts to occur and can spell trouble for nearby planets with an atmosphere within 6,000 light-years. Gamma rays are produced in the cataclysmic end of a massive star as it is torn apart by a gigantic explosion called a supernova. The collision of two neutron stars can also produce these deadly rays that blast out in a straight line from both poles of the star or collision. Like looking down the barrel of a rifle, the beam must be directly pointed at a planet to wreak its havoc on that distant world and life if it exists.

Some scientists have theorized that a narrow beamed gamma-ray lasting only ten seconds hit the earth some 440 million years ago from a star a few thousand light-years away. Keep in mind that one light-year measures close to 10 trillion kilometres in length. This is believed to had led to the Ordovician extinction, the second largest of the five extinctions the earth has endured. Back then there were no creatures walking or flying on earth. A flurry of marine life surged into existence in the oceans during the Cambrian Explosion some 540 million years ago.

When the proposed gamma ray hit our world, they caused the planet to lose half its protective ozone layer and subjected the earth to intense solar radiation. This led to an ice age and the Ordovician extinction where about 85% of saltwater species perished due to the drop in water temperatures, especially in tropical waters.

The cosmos is not a dull place where stars simply shine. Violent events off the scale are happening at a much slower time scale with the possibility of dire consequences changing life on distant worlds thousands of light-years away. So far we are in the clear of any such life-changing events, however, the universe likes to throw us a curveball now and then.