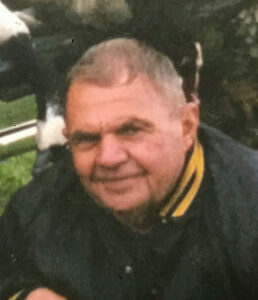 Dean Arthur Smith, 84, passed away on Tuesday, May 18, 2021 at his home in Hale, MI surrounded by his beloved wife and family.

He lived in Hale all his life and wintered in Florida Keys. He was born on April 10, 1937 in West Branch and raised by Irwin and Lois (Mitchell) Smith. Dean married Patricia Ann McCahill in Newaygo, MI on July 16, 1978.

Dean worked for Bolen Trucking and Rosebrugh Trucking for many years. As a big-rig trucker, on the road he was known to every trucker as “The Bandit”. He was a honorary retired member of the International Brotherhood of Teamsters Local Union #486 and volunteered as a Deputy Marine Patrol for Ogemaw County. He was a simple man who enjoyed his summer home in Wawa, Ontario, Canada, traveling, hunting, fishing, trucking and cutting grass. He was an avid outdoorsman and never missed an auction.

Dean is survived by his beloved wife, Ann Smith of Hale; daughter, Nadine (Dale) Bosley of Birch Run; sons, Martin (Rena) Smith and Kevin (Patricia) Smith both of West Branch; stepdaughters, Jennifer (Bradley) Halfman of Mesa, AZ, Elizabeth (Brian) Eaves of Birch Run and Janet (Parker) Gillock of Independence, VA; stepson, Sam Irwin of Hamilton, Ontario; and many grandchildren and great-grandchildren. He was very proud of being a grandpa and great-grandpa. Dean is also survived by his two loving greyhounds, Busy Bee and Legend.

He is preceded in death by his parents and daughter, Anessa Smith.

He will be sadly missed by his entire family.

Per his wishes, cremation has taken place.