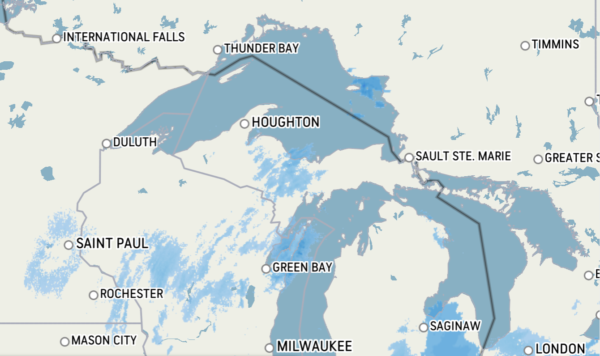 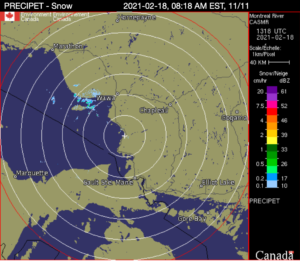 The radar at Montreal River is snowing snow just between Michipicoten Island and the mainland (Wesdome/Pukaskwa Park). A look at AccuWeather’s radar map that shows the weather coming at Lake Superior from Minnesota displays two significant bands of weather that are headed towards Marquette. This combined with the lack of ice cover on Lake Superior means that lake effect snow will generate snow squalls and poor weather. This weather system is expected to be strongest between Wawa and Marathon. The upside of this is that the more snow that falls, the better the volunteers can pack the snowmobile trails!

If you must travel, have a cold weather kit onboard, file a travel plan with family/friends, please watch the road conditions, plan alternate travel routes if possible should highways shut down. Always ensure you have a full tank of gas when you leave a community. The last road closure between Wawa and Sault Ste. Marie lasted several days. Remember there is long distances between communities, and you may be stranded in a lineup for several hours in the middle of nowhere. Highways have closed for many hours at a time in order to investigate serious and/or fatal collisions, vehicle removal, highway cleanup.

The heaviest accumulations are expected close to the shoreline west of Wawa where amounts may exceed 20 cm.

Snow squalls may develop later this morning and continue into Friday.

Travel along Highway 17 between Marathon and Wawa may become hazardous due to heavy snow and poor visibility. Accumulations in excess of 15 cm are possible, although the shifting nature of the snow bands may limit accumulations somewhat.

At this point, it appears that the heaviest amounts will occur south of Highway 17 west of Wawa where a snow squall warning has been issued.

The snow squalls should move east of the region by late Friday.

These snow squalls could potentially produce 15 cm of snow within 12 hours.