On October 16, 2020, a 47-year-old man suffered a fractured left-sided rib in a motor vehicle collision north of Marathon. As the vehicle he was in had briefly been pursued by an Ontario Provincial Police officer moments before the collision, the SIU was notified and commenced an investigation. The Director of the Special Investigations Unit, Joseph Martino, has determined there are no reasonable grounds to believe that the OPP officer committed a criminal offence in connection with the collision. 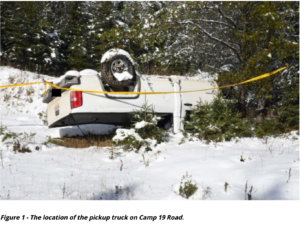 At 1:28 a.m., the OPP police officers were authorized to resume patrols for the suspect truck and discovered that the Complainant’s vehicle had rolled into a ditch on Camp 19 Road – an extension of Peninsula Road north of Highway 17. The Complainant was arrested along with another occupant in the truck, CW #3.

The Complainant was taken to Wilson Memorial General Hospital (WMGH) having suffered a fractured rib. He was discharged from hospital and returned into the custody of the police awaiting a bail hearing.

On October 16, 2020, the Complainant suffered a fractured left-sided rib in a motor vehicle collision north of Marathon. As the vehicle he was in had briefly been pursued by an OPP cruiser moments before the collision, the SIU was notified and commenced an investigation. The driver of the OPP cruiser – the SO – was identified as the subject officer for purposes of the SIU investigation. On my assessment of the evidence, there are no reasonable grounds to believe that the SO committed a criminal offence in connection with the collision.

The offence that arises for consideration is dangerous driving causing bodily harm contrary to section 320.13(2) of the Criminal Code. The offence is predicated, in part, on conduct that deviates markedly from a reasonable level of care in the circumstances. There is nothing in the evidence, in my view, to suggest that the SO transgressed the limits of care prescribed by the criminal law.

The officers were within their rights to initiate a pursuit on Peninsula Road. Given what they had been told of the 911 call, they had good cause to believe that the truck they encountered contained the Complainant, who had reportedly committed a serious criminal offence.

Thereafter, there is little to no evidence that the SO endangered the lives of anyone as he briefly pursued the pickup truck. While the officer did reach speeds upwards of 150 km/h, he did so over an engagement that was brief in time and distance (about one minute and 1.7 kilometres), with emergency lights and siren on, and at a time when there would have been little to no traffic on the road. Notwithstanding his speed, the SO was unable to gain any ground on the pickup truck and, wisely in my opinion, terminated the pursuit soon after it had begun about two kilometres from the collision scene. Regrettably, instead of following suit and reducing his speed, the driver of the pickup truck continued his reckless course and crashed the vehicle on Camp 19 Road north of Highway 17.

As I am unable to reasonably conclude on the foregoing record that the manner in which the SO operated the police cruiser in the moments before the collision fell afoul of the criminal law, there is no basis for proceeding with criminal charges in this case against the officer. The file is closed.

The full report can be read here.