A Telescope for Christmas 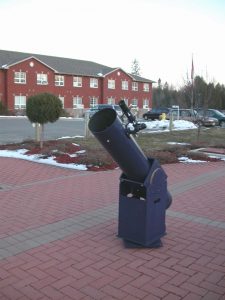 As we move closer to the most wonderful time of the year, what do you get that budding astronomer? I always suggest for those who have an interest in the night sky, to begin with a pair of wide-angle binoculars such as 7X35. This translates to seven power magnification with 35-millimetre objectives lenses located in the front. These are not too large or heavy, especially for children. It will capture a wide field of sky and show a lot of stars. With such low power, you will not see great detail on specific objects as you would with a telescope but is a great tool in locating these targets like star clusters etc. and learning the night sky.

If you are confident a telescope is a must there are a few things to consider first of which is where to purchase the item. Purchasing at a big box store or camera dealer is not advisable. These are usually lower-end telescopes that might look like a great bargain with splashy images on the box and statements of “400 power” magnification but in the long run, will most likely end up at the next garage because of disappointing views and mechanics. There are many reputable dealers online and local telescope stores that know about these instruments and astronomy.

Next is the price. Although spending $500 to $800 might seem a lot of money, remember the ‘ole saying “you get what you pay for”. I bought my first serious telescope (an 8-inch f/6 Newtonian reflector pictured here) back in 1977 that I am still using today during public speaking star nights and is very portable. This exact size will run in the $600 to $800 range depending on the manufacturer. I have viewed spectacular lunar craters, the rings of Saturn as well as the bands of Jupiter and moons of both planets. From dark sky locations, I have seen hundreds of remote galaxies residing tens to hundreds of millions of light-years away. The 48-inch long tube rests on a wooden Dobsonian mount that does not have motors. This is a great way to locate distant celestial objects using star maps and learn the sky rather than push a button. I would highly recommend this model telescope for the intermediate astronomer.

As mentioned the Dobsonian mount has no electronics whatsoever and relies on simple balance when pointing to an object. Push power to celestial treasures is the only way to get around. Without motors that compensate for the earth’s motion, photography with a DSLR camera attached to the telescope will only capture extremely bright objects with quick exposures like the moon and the sun (with an approved solar filter). For those wishing to take up astrophotography, be prepared to spend $2,000 to $5,000 or more on a computerized model that is designed to track the sky and has a built-in database containing the positions of thousands of objects. With the click of a few buttons, these telescopes will move to the desired object. It is best to set your goals with something small and simple to use and enjoy the wonders of the night. You can always upgrade down the road. Feel free to contact me with your questions.