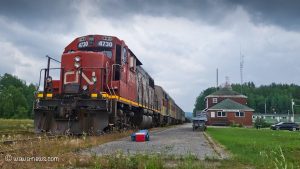 I’m often asked that question by folks who’ve heard of my rail industry credentials.  I guess they haven’t listened to MPP Vic Fedeli, who has described me as one of those “consultants with self-serving agendas” because I pointed out the lack of action by his government and Ontario Northland Railway (ONR).

It’s a fair bet Fedeli & Co. won’t like my explanation of why northern rail service is a disaster.  It’s a combination of politicians who never deliver on pre-election rail promises and a lack of the political will (or smarts) to compel the publicly-funded railways they control to do it.

And here’s a fresh example.  VIA Rail Canada – always under Ottawa’s thumb – has announced it will “gradually” relaunch its transcontinental train, the Canadian, on December 11. Along with VIA’s other remaining long-distance trains, the Canadian was suspended due to the pandemic in March.  Most still haven’t been revived.

However, only the Vancouver-Winnipeg segment will be restored.  VIA’s release is mute on the Toronto-Capreol-Winnipeg half of the run or the third frequency promised in 2019, when it was reduced to twice weekly due to sloppy, delay-ridden handling by CN.  Nor anything on restoring the Sudbury-White River train to three trips per week from the current one per week.

We shouldn’t be surprised.  VIA has been largely irrelevant and docile since 1990, when the Mulroney government slashed it by half, despite a 1984 election promise to restore trains cut by the Trudeau Liberals.  At the same time, the ONR service was nose-diving due to Ontario’s failure to properly replace the exhausted European trains bought to launch the Toronto-Timmins Northlander in 1977.  The eventual substitutes for the classy former Trans Europe Express trains were rebuilt GO commuter cars from 1967.

I thought of all this earlier this week while doing some research for my forthcoming book, A National Dream Reborn?  This merely involved watching one of the many live cameras U.S. rail buffs have placed throughout the Land of Free Enterprise – and publicly-supported passenger trains.  It was at Galesburg, Illinois, the junction of two Burlington Northern Santa Fe lines linking Illinois and California.  The live cam enables you to watch the comings and goings of two Amtrak long-distance trains:  the Southwest Chief from Los Angeles and the California Zephyr from Oakland.  The comparison with our passenger service is exciting … and depressing.

Both trains use bi-level Superliner cars.  The first batch was built in the late 1970s by Pullman and the second lot by Bombardier, which acquired the designs after driving Pullman out of business using Canadian public financing to secure orders.  Amtrak’s Superliners may lack the pizzazz of VIA’s 1950s Budd cars, but this higher-capacity rolling stock compensates with reliability, spaciousness and cost effectiveness.

Both trains set off and picked up a fair number of passengers at Galesburg, all wearing masks and being socially distanced by the masked crews.  The trains have grown longer as Amtrak has added cars to spread passengers out, some of whom have taken advantage of reduced rates for enclosed sleeping car spaces for daytime use.

So, why isn’t this being done in Northern Ontario?  To be fair to VIA, the fact that the federal government has not extended a cent of emergency funding to our Crown railway is a factor.  In its September 23 Throne Speech, the government did say it “will work with partners to support regional routes for airlines. It is essential that Canadians have access to reliable and affordable regional air services.”

This should be uplifting news for the residents of Latchford, Longlac, Levack and dozens of other northern communities without air service, but on existing and unserved rail lines.

This ignorance of rail is at the heart of the problem.  Federal and provincial politicians, past and present, have poured billions of our dollars into competing highways and air facilities without including passenger trains in what should be a balanced system of travel modes and options.

Much could be done in Northern Ontario to make use of our now-mothballed trains to provide safe public travel in these challenging times, as Amtrak demonstrates daily.  Restored and expanded rail service would connect Northern Ontarians within their region and the rest of Ontario.  It would provide access to visitors, delivering an economic boost to struggling tourist operators on the Sudbury-White River and Capreol-Winnipeg routes.

Only the corrosive actions and non-actions of politicians are responsible for this not occurring.  Meanwhile, those Amtrak trains keep rolling, as do those of every other enlightened nation.

Will Northern Ontarians continue to be passive?  If they do, they’ll have a lot more than just vanished passenger trains to ponder in the days and years ahead.