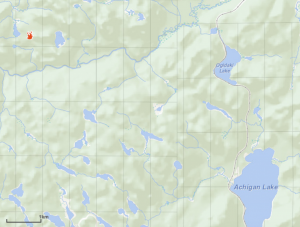 There are sixteen fires active across the Northeast Region: two of which are under control and fourteen are being observed. Sau010 is burning about 5 km west of Ogidaki Lake. It is 0.2 ha and is being observed.

The fire hazard is mostly moderate in areas east of Parry Sound and North Bay this afternoon, as well as in areas west of Wawa and north of Kapuskasing; while the central portion of the region is showing a high to extreme hazard.

We are coming up to the peak of the Perseid’s. The annual journey through the stream of debris from giant comet 109P/Swift-Tuttle creates some of the most beautiful shows of meteors and very bright ones, called fireballs. If you look to the sky where Cassiopeia is, just underneath is Perseus where the Perseids come from. The best time is in the early hours before dawn, but you should still see some after dark.