On August 4, 2020, at approximately 8:40 a.m., members of the Superior East Detachment of the Ontario Provincial Police (OPP) responded to a complaint of several loud noises coming from a property on Churchill Avenue in Wawa.

As a result of the investigation, Peter BANKS, 18 years-of-age, from Wawa, was arrested and charged with the following:

The accused was remanded into custody and is scheduled to appear before the Ontario Court of Justice for a bail hearing on August 12, 2020.

SE OPP – Arrest made after vehicle stopped for speeding

SE OPP Wawa – Arrest made after Theft of Gas 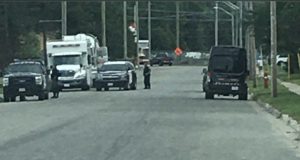