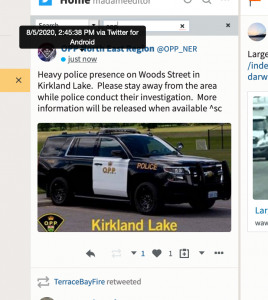 Wawa-news has come under fire for publishing photographs of ‘heavy’ police presence in the Darwin/Churchill area yesterday. Wawa-news stands by its position that this is news and residents of Wawa should be informed as to what is happening in their community. Some residents are upset that their house shows in a photograph – if MCTV had a reporter in Wawa – I think that they would have been there with their video cameras and showing it to the entire province.

The bigger problem is not my coverage, the problem is the delays and sometimes lack of information reaching residents of Wawa.

There were many Wawaites who blew my phone up last night wondering, worried and concerned as to why there were at least 9 OPP vehicles congregated in that small area, road blocked, officers walking through backyards… There are a number of families with children, and a number of seniors in that area. Nothing was reported, nor tweeted by our local OPP warning residents to stay away or to take any safety precautions, ie, locking doors, stay inside, etc.

This is in huge contrast to the tweet that just came across my notifications this afternoon from the NE OPP (our policing district), warning residents of Kirkland Lake of “Heavy police presence on Woods Street… Please stay away while police conduct their investigation..” Is Kirkland Lake better than Wawa?

Wawa-news has covered ‘Heavy Police Presence’ before, most recently in mid-July. That occurence really highlighted the lack and delays of information for Wawaites, and raises the question of risk.

To refresh your memory: On Tuesday, July 15th, a vehicle suspected in a Thessalon theft of gas was located near Red Rock Lake (Lake Superior Provincial Park) at 11:15 a.m. after complaints had been made about a black sedan driving at a high rate of speed and passing unsafely. OPP said that spike belts were deployed unsuccessfully.

The media release explained that a short time later, the driver asked someone for some gas, and lucky for us (unlucky for them) it was an off-duty OPP Sergeant, this was on the Steephill Dam Road. He called and advised the on-duty officers, and the road was contained and a search began. This explains the police presence that Wawaites texted Wawa-news about at the end of Government Road and at the end of Wawa Lake (Loonskin Lake Road).

The vehicle was eventually located, stuck, and both occupants fled from officers on foot into the bush. Northeast Region OPP Canine Unit and Emergency Response Team (ERT) members searched overnight for the pair, who surrendered themselves at approximately 8:00 a.m. 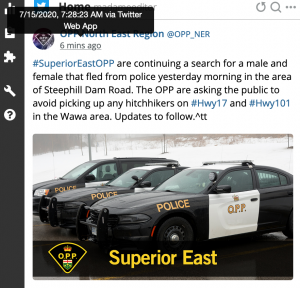 Then 5 1/2 hours after the pair was arrested, SE OPP tweeted that the pair had been arrested, and with a number of charges – even a weapons charge.

Throughout that night I watched Twitter (and my email) for any updates so that my readers would be informed. It isn’t so much that they are not giving out information to local media – but that they are not giving out any information out until later, much later, and through Twitter. I’m sure that many residents were taking better precautions that night after reading my articles.

Keep in mind that the OPP created a media dissemination site “the OPP News Portal”, to which media have to have a password to and subscribe to receive media releases as they are posted by OPP. This simplified the process to notify the many media sources for every area and changing emails for media contacts – each media release goes to this site, and then on to the media who subscribe to the area of their interest.

It is one thing not to inform about highway closures – but the question to be asked is “Was there any risk to Wawa residents; and should the SE OPP re-evaluate their current policy of only distributing possibly critical safety information through Twitter?” Nova Scotia RCMP are under fire for their delay in getting information out – and that delay may have been a contributing factor in some deaths.

Wawa pays for policing – to be protected, and deserves to be promptly informed of any risk to the community.

Wawa-news will continue to do its best to cover the news and provide information good and bad to you, the residents of Wawa.

Wawa-news would also like to take a minute to thank the sponsors and advertisers (Wawa and the Soo) who support this website. Your support keeps this site alive! Thank you! 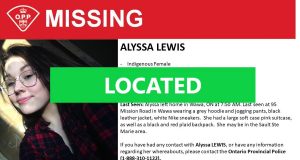 Have you seen Alyssa? – UPDATED Located!