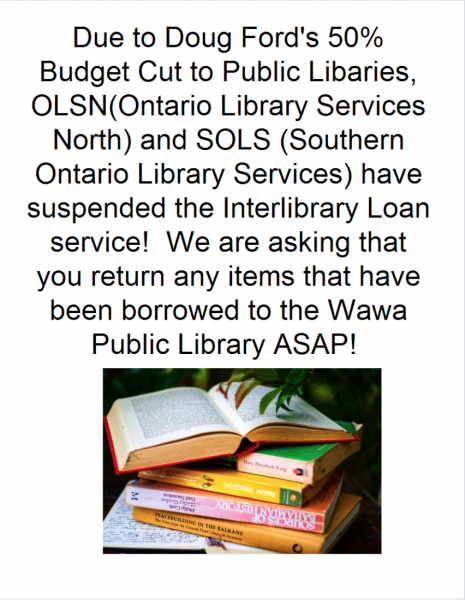 The Ontario Library Service (OLS) delivers services on behalf of the Ontario Minister of Tourism, Culture and Sport. In Ontario’s budget for 2019-20, which was tabled on April 11th, that ministry will have its funding cut by $58.6 million — from $1.55 billion to $1.49 billion.”

As a result of these budget cuts, OLS – North is no longer able to provide postage reimbursement to participating libraries. OLS – North paid the costs of postage for interlibrary loans in Northern Ontario.

On April 20th, SOLS announced that regular interlibrary is suspended province-wide until further notice and that all Ontario libraries return borrowed interlibrary loan materials. From the SOLS website “It is with great sadness that I have to inform public libraries in southern Ontario that the SOLS interlibrary loan delivery service will permanently cease to operate, effective April 26th, 2019. I know this is very sad and disappointing news but given the enormity of the cut to our operating budget, there is no alternative. Even under our previous budget allocation, it was becoming difficult to sustain the service because of ever-increasing operating costs.”

The full impacts of the budget cuts is not known yet.

CEO Colleen Abbott responded to the email stating “The future change in our library hours is a function of the Wawa Public Library Board, not the CEO.  How the budget cuts affect us is yet to be determined.I have directed your inquiries to the Board.”

A statement on Behalf of Northern Ontario Public Libraries