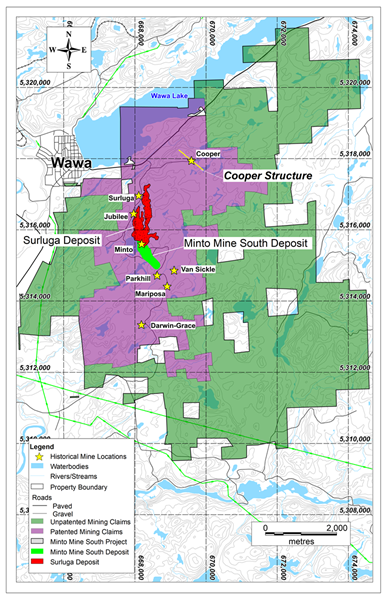 Red Pine Exploration Inc. has announced the identification of a new high-grade structure – the Cooper Structure, 1 km east of the northernmost extension of the Surluga Deposit and 2.8 km northeast of the Minto Mine South Deposit.

Quentin Yarie, President and Chief Executive Officer of Red Pine stated, “Our geological mapping and channel sampling program on the Cooper Structure supports our hypothesis that other geological structures similar to the Minto Mine South Structure exists on the property. Historically, a hole drilled by Citadel Gold Mine in the 1980’s intersected the Cooper Structure down-dip of our channel sample, and returned 10.90 g/t gold over 4.39 metres.   This suggests that grade and width could improve with depth. This high-grade zone in the Cooper Structure remains entirely open to the south, along the plunge direction, and represents a compelling future exploration target that starts at surface.”

Table 1. Highlights of results from the 2018 channel sampling in the Cooper Structure

Wawa Gold Project Background
Since December 2014, Red Pine’s exploration work has involved the ongoing sampling of 42,000 m of historic core that was never sampled by previous operators of the project, and exploration drilling campaigns. To date, the Company has completed over 59,000 m of drilling and made four discoveries along the extension of the Surluga Deposit: the Surluga North Zone; the Hornblende-William Zone; the Minto Mine South Zone and; the Grace-Darwin Zone. These are part of the Wawa Gold Corridor, a gold-mineralization zone that extends for more than 5 kilometres.

Red Pine’s on-going exploration program is designed to potentially expand the size of the existing inferred gold resource and connect the other zones of gold mineralization along the newly-discovered Wawa Gold Corridor. The Company issued a maiden resource for the Mint Mine South Deposit in November 2018 and plans to issue a revised NI 43-101 for the Surluga Deposit in April 2019.

On-site Quality Assurance/Quality Control (“QA/QC”) Measures
Samples were transported in security-sealed bags for analyses to Activation Laboratories Ltd. in Ancaster, Ontario. Individual samples are labeled, placed in plastic sample bags and sealed. Groups of samples are then placed into durable rice bags and then shipped. The remaining coarse reject portions of the samples remain in storage if further work or verification is needed.

As part of its QA/QC program, Red Pine inserts external gold standards (low to high grade) and blanks every 20 samples in addition to random standards, blanks, and duplicates.