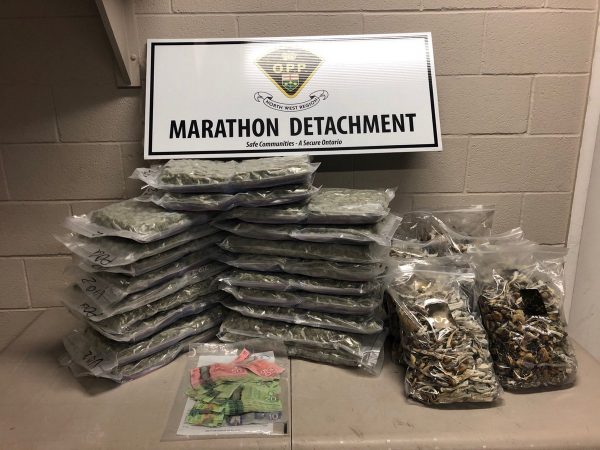 On November 18, 2018, at approximately 1:45 p.m. an officer of the Ontario Provincial Police (OPP) Manitouwadge detachment was on patrol on Highway 17 near Highway 614 when he observed a motor vehicle stuck in the snow on a service road on the south side of the highway.

After speaking to the single male driver and further investigation, the officer located 10.25kg (27.6lbs) of cannabis marihuana bud, 3.9kg (8.6lbs) Psilocybin Mushrooms, and a large sum of cash which is to be forwarded to the OPP Asset Forfeiture Unit for consultation and totaling of cash.

The male, Casey Dean BIGG, a 35-year-old from Kamloops, BC was arrested and charged for the following

He is being held for a video bail hearing in Marathon on November 19, 2018.

Marathon OPP Charge Driver with impaired after collision at Mall