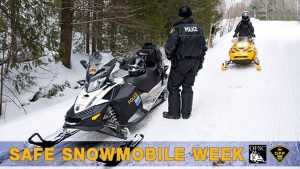 The Ontario Provincial Police (OPP) responded to 27 snowmobile deaths during the 2016-2017 season, marking the highest number of fatalities since the winter of 2003-2004.

Last season was also the worst on record for snowmobilers whose ride took a tragic turn while travelling on frozen waterways. One third (9) of last season’s victims died as a result of their snowmobiles either going through the ice or entering open water.

As the OPP kicks off Safe Snowmobile Week with the Ontario Federation of Snowmobile Clubs (OFSC), they are urging snowmobilers to leave all forms of risky behaviour behind when heading out for a ride, especially when riding on frozen waterways.

“The spike in snowmobile fatalities and all-time record high in ice-related deaths last season are unacceptable. The vast majority of the 27 snowmobilers who died took unnecessary risks instead of making it a safe, enjoyable ride that got them home safely to their families. With very few exceptions, speeding, driving too fast for the conditions, consuming alcohol, riding on unsafe ice and other risky behaviours are what lead to snowmobile deaths every year.”, Deputy Commissioner Brad Blair, Provincial Commander, Traffic Safety and Operational Support

“Snowmobiling occurs in an unpredictable and uncontrollable natural setting with inherent risks that demand constant rider preparedness, vigilance, caution, unimpaired reaction and smart decisions. The OFSC encourages all snowmobilers to click on the  GO Safe link on our website to learn about how they can enjoy the safest ride possible”, Lisa Stackhouse, Manager, Participation and Partnership Development, OFSC.