“The Ontario PCs have been very clear, Ontario is in the midst of an opioid crisis. Between 2006 and 2015, fentanyl overdose deaths in Ontario have soared by 548 per cent. Opioid overdoses and abuse can tear apart families and communities, and our vulnerable youth are being put at risk.

As a result of the ongoing and growing crisis, the Ontario PCs have called on the Liberal Government to take the following actions:

Last week in Timmins, I announced that the Ontario PCs will be putting forward legislation requiring the Liberal government to invest at least 10 per cent of their government advertising budget this fiscal year to an opioid and fentanyl awareness campaign. MPP Michael Harris also has a Private Members’ Bill before the Legislature to crack down on pill press machines.

As more and more stories continue to come out about tragic and preventable opioid overdose deaths, the Wynne Liberals should immediately pass these two bills when the Legislature resumes in September. These are important steps that will help to stop this crisis in its tracks.” 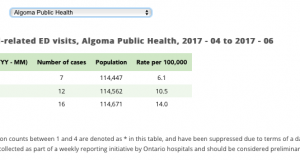 Ontario Providing Support to Those Affected by Opioid Crisis