A Year Ago, Our Lives Changed – Living with Post Concussion Syndrome

About a year ago, our lives all changed dramatically. Little did I know that the happiness and relief I felt after I heard the words “he’s alive”, would quickly go away and we would then experience the hardest year of our lives. I had no idea what this accident would result in, even though I was holding my husband in my arms. 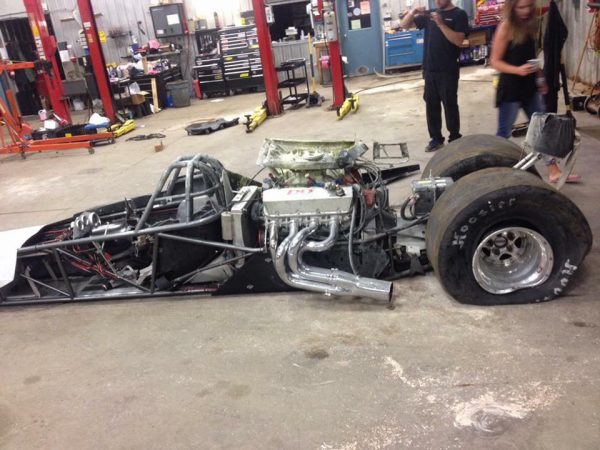 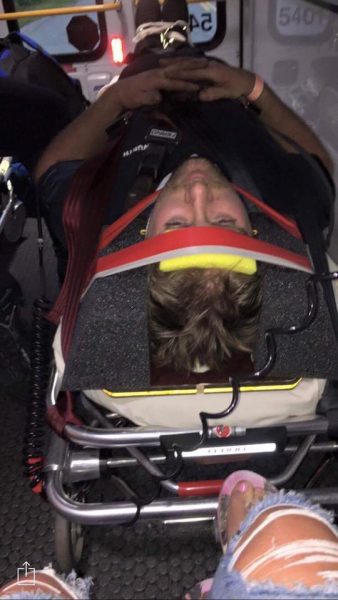 One year ago, Chris was in an accident while drag racing a rail car for Mission Motors.

One year ago, I spent 20 minutes not knowing if the father of my two young girls, was alive or dead.

One year ago, I felt my body go numb while my kids ran around me, playing obliviously.

One year ago, everything changed.

I really wanted to write about this and I’ve been thinking about it throughout these last few months… what to share?, what to say?, how to say it?, as all the changes happened. I don’t know where or how to start, but I thought this would be a way for me to help raise awareness for brain injuries and everything that goes along with it.

My husband lived. Let’s start there. We were all so incredibly relieved. He got out of the car with what we thought were just a bunch of bruises. Thanks to his HANS device, (a contraption that straps your helmet to your shoulders to stop your neck from breaking) he walked away from this horrific accident. Thanks to the HANS device, his neck didn’t snap on impact. Suddenly going from 170mph, to barrel rolling a dozen times, is a massive jolt to the neck and head.

We were so happy that he was alive, that we didn’t think about the obvious concussion that he might have. Not just us, the doctors either. No one mentioned it was a possibility. 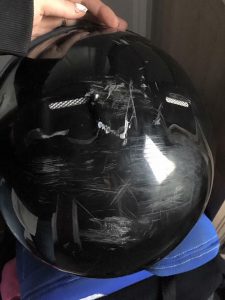 Unfortunately even though his head didn’t hit much more than the roll cage from inside a helmet, it didn’t matter. The sudden decrease in speed caused his brain to move and stretch and bang around inside his skull, inside his helmet, and we had no idea.

Weeks would pass, Chris was very sore here and there. Especially where the HANS device was over his shoulders. Bruises appeared and took time to go away, all a reminder of how badly that day could have went. “Just bruises” we thought… “the pain shouldn’t last much longer.” Even knowing it would/should pass, he went to see the doctors multiple times, for X-rays to make sure his collar bones or ribs weren’t broken. All x rays and tests came back clear of any breaks.

Months passed and Chris was growing more and more frustrated with his pain, that still hasn’t subsided… it’s actually gotten worse. He is dizzy all the time, feels ill all the time, is very short tempered, and can’t sleep because laying down caused such extreme vertigo. He was spending every single day, tired beyond belief because he’d spent every night crying himself to sleep in pain, from his chin all the way down to his toes.

This can’t be normal…

He described the pain as a Charlie horse all over his body. So naturally I started googling his symptoms and came up with a few things on my own. Either he miraculously developed fibromyalgia overnight (the doctors also incorrectly diagnosed this!), or he was suffering from an extreme concussion. You can imagine the frustration when I realized it was for sure, the latter.

Why weren’t we told?

I reached out to one of my friends that I met one time while he was running across Canada for brain injury awareness, and he told me that it for sure sounded like Post Concussion Syndrome.

I happened to mention it in front of the right person, a local chiropractor, and she hooked me up with a concussion specialist/ sports medicine doctor in Sault Ste Marie.

Not covered by our insurance, we went ahead and got set up with him. Chris’ appointment was SO educational, I was blown away with how they explained how everything worked with the human brain and a brain injury. How well they could describe how chris was feeling without us having to say a word. Finally, answers.

They told us basically since he had not been told right away to stay out of work for a few weeks, that he had made himself worse off. What might have taken 3-4 weeks to heal, would now take up to a year to heal, since he wasn’t getting the rest he needed. He didn’t have short term disability so taking time off work wasn’t an option.

There are a lot of misconceptions about concussions saying that it’s bruising of the brain, when really it’s the stretching, pulling, and tearing of the neurons that becomes an issue. Chris was suffering from nerve damage, in his brain.

The length of time that he spent suffering with this concussion, resulted in some permanent brain damage.

Treating this type of brain injury was a balancing act. Chris couldn’t take pain medications without either just sleeping or having stomach pain because of them. He took days off work here and there as much as he could but it wasn’t enough.

Because he was medically cleared to work a modified shift, he couldn’t go on a medical leave. He also couldn’t stop working, because he had a family to take care of. What he really needed was a leave. Some time off to focus on getting well.

After months of hell, pain, depression… he finally decided he couldn’t do it anymore. He was having some issues at work, and needed to make a change to get better. He ended up taking a layoff early this year in February. He was religiously visiting a chiropractor to relieve him of the aches and pains that his brain was telling him he had. Every time feeling a little bit better. Leaving work was a massive help for his wellbeing as well, the stressful and not-so-understanding environment lead to a lot of his pain.

Finally around March or April, I started to see parts of the old chris back again. But in the meantime, everything else had fallen apart.

Mission Motors decided they weren’t going to have him back. So not only was he trying to heal, now he had the stress of trying to find a job on top of it all. Luckily he found something and they were very courteous and gave him two months to heal before having him start, knowing his situation.

It was a very difficult few months to endure as a wife, watching my husband turn into someone I didn’t even recognize. I can imagine it was difficult for Chris as well, not knowing if there would ever be an end to his pain. It got to the point where he was begging me to shoot him just so the pain would stop, and I’m not sure if he was kidding.

This brain injury has tested us in every way. It tested me as a wife, and mother because a lot of the time I was dealing with the kids alone because he was in unbearable pain, it tested our relationship, it tested my patience and his, it tested his pain tolerance, and it tested his will to live.

If anyone gets anything from this story, I hope it’s to not mess around when it comes to a concussion. It might seem like a small thing but if left untreated, it could be life changing. The person might be sitting in front of you alive and well, and you might just be overjoyed at that fact… but look deeper, because we didn’t, and we suffered.

Chris is now doing better… we are working on getting back the time we lost by spending lots of time together, he’s working a new job at Northern Lights Ford, and feeling much better. 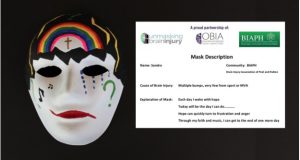