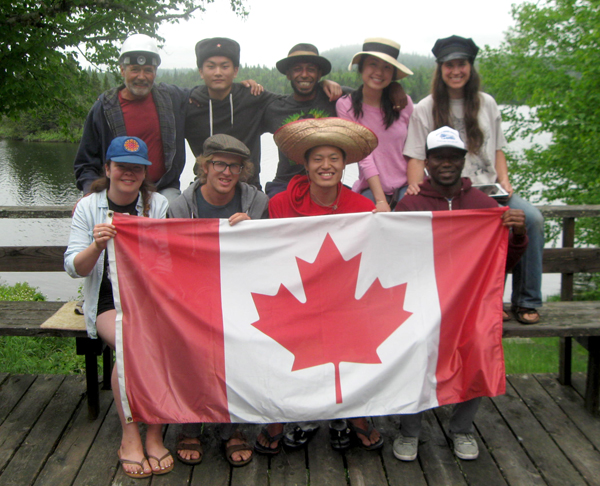 It was the last week in June when the neighbours at my camp on Loonskin Lake brought in an international ‘delegation’ from Sault Ste. Marie into the wilderness to experience the Canadian outdoors.

The weather did not cooperate, it was raining on and off, foggy and lots of bugs which made a sauna on my end a refuge and a place to sweat and bond in international unity. A dunk after each session in the refreshing lake make kids out of young adults again. The laughter and joyful squeals were infectious.

The youngest was nineteen, his name Santa (really!); he came from Japan just two weeks ago, but he took to the water like a seal. I was not sure if he could swim, because his English was so, so, and my Japanese – NIL. He put on a life vest, took another as a skateboard and dog-paddled fearlessly for hours… he was in his own world.

And then there was Cheikh from Senegal, a Muslim on a fast. He did not participate in munching, or drinking like the others with their hollow legs. He explained that only after sunset would he eat. I, who likes to eat small but often, asked him if it was difficult for him seeing his buddies wolfing down hotdogs, chips, and anything edible the entire day? He explained that his body has adjusted, and is used to it.

Then Feisal from Saudi Arabia, who smoked like a chimney and liked Canadian beer. He was a ‘firecracker’ always joking. Luckily he brought his own supply which only lasted one day; and by the second day asked, “where the next smokeshop was?’. I think he learned that day what ‘withdrawal’ was.

Yes, there was another Japanese student, whose name I cannot recall; who explained to my question, “are sauna’s popular in Japan?”. ‘Yes, but everybody goes in nude!”, was his response, which caused a chuckle amongst the others.

I cannot ignore, Diana, a pretty oriental looking Canadian girl whose parents were Chinese/Korean. A horrific story followed about her grandmother who fled from a brutal regime with her children, with only the clothes on their back. Fair skinned Jamie, who was born in Canada, but her parents came from Scotland with a name starting with Mc.

Last but not least, Jordan claimed Berlin as his birthplace, and as I proclaimed it also as my place of birth and continued in German; he put up his hands and said, “When my grandparents came to Canada it was Berlin, now it is Kitchener. My parents spoke German, but my knowledge is flawed.”

Before this interesting weekend ended, I insisted on a groupshot with hats of their choice from my collection — and this is what they chose: from ball caps, hardhat, fedora, sombrero, to Russian army cap, all covered by a Canadian Flag. That’s what I call unity. Skin colours from pale to the deepest brown, languages from all over the globe. Why can’t life be that harmonious every day?