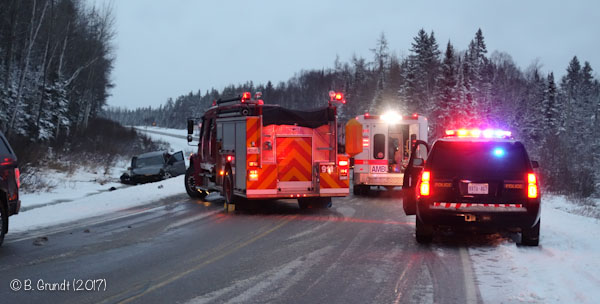 Last night at 8 p.m. Algoma EMS and the Wawa Fire Department were called to a collision just past the Ghost Lake ‘s’ curve.

Two vehicles had collided, sending one into the westbound ditch, and the other remained resting on the eastbound shoulder. Wawa firefighters assisted with removing what appeared to be the driver from the vehicle, placing him on the stretcher, and then being loaded into the ambulance for transport to the Lady Dunn Health Centre. There was no word on how many were transported to the hospital, or injuries. The roads were bare and wet with some lightly slushy sections at that time.

Wawa firefighters remained on the scene conducting traffic control until both vehicles were removed.

The highway was completely open at 10 p.m.