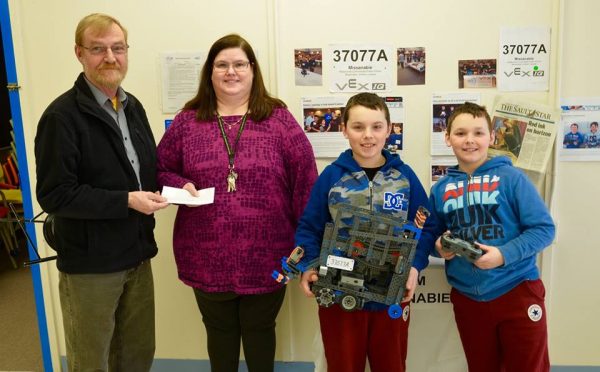 Rotarian Russell Reid presents a cheque on behalf of the Club to Christine Creasey, Principal/Teacher and Coach and project manager. is support of the brothers competitive adventure later in April.

The Rotary Club of Wawa supports TEAM MISSANABIE in their trip to the World Championships to be held later this month in Louisville, Kentucky. 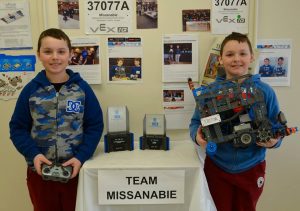 Rob Clarke, Rotarian explained, “An outstanding effort and commitment of two young gentlemen, Chase and Hunter Martel (8 and 10) from Missanabie, Ontario, has resulted in their qualification in the VEX IQ World Robotics Championships, Elementary Level, to be held in Louisville, Kentucky. They have qualified by competing in Sault Ste. Marie and then at the Nationals in Brampton. We wish you the best of luck and of course, have fun!”

The only students at the Missarenda Consolidated Public School in Missanabie, these two brothers advanced to the VEX IQ World Robotics Championship after first competing in Sault Ste. Marie in January and then at the Provincial Finals.  The VEX IQ Robotics competition is now in its second year, having replaced Algoma Region FIRST Lego League Challenge.

Tenaris Algoma Tubes began the brother’s journey in this competition by funding the robotics kit last September. The kit was opened just before Christmas, and the two brothers, video game lovers took the challenge to heart. A mere month later, their first competion saw them with a score of  56 – 31 points for driver skills, 25 for programming. That was good for a fourth overall standing in Canada.

Their skill in design and competing isn’t the only challenge. The entrance fee for the competition in Kentucky is $1,150 and the travel costs are estimated to be $5,000. The Rotary Club of Wawa has assisted with some of these costs, and the family has launched a GoFundMe campaign (link).