From the Park – Sgt. Charles Byce Monument in Chapleau & Bears 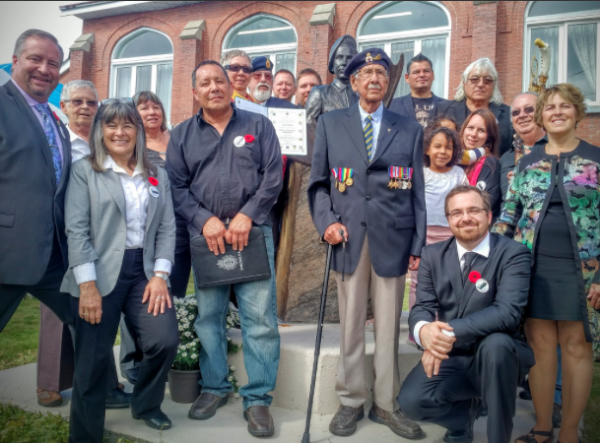 There is no shortage of news coming out of Queen’s Park in the last couple of weeks. Watching the evening news is akin to watching a province wide convention of illusionists trying to amuse and mystify the masses. Recently it seems that every time you turn around another minister is behind a podium announcing some new program or grant that the Liberals promise will save the province. But when people look to see what is REALLY going down, it’s a “now you see it, now you don’t” situation. This sleight of hand show is all very entertaining and I plan to address it in days to come. However, this week I want to draw your attention to another matter in which I had the honour of participating.

On September 17th, I was invited by the Royal Canadian Legion Br. 5 in Chapleau to attend a ceremonial unveiling of a monument dedicated to the honour of Sergeant Charles Henry Byce. Charles Byce was born March 8th, 1917 in Chapleau in Chapleau Ontario while his father, Henry Byce, was fighting in Europe during WWI. Charles’ mother, Louisa, a Cree from Moose Factory had married Henry who was non-indigenous.

At 23 years of age, Byce signed up in the military with the Lake Superior Regiment. Charles went on to serve in WWII. As a result of his actions on the battlefield in January 1945 in Holland, Byce was awarded the British Military Medal. Then, just a few weeks later he was awarded the Distinguished Conduct Medal for the demonstration of his extreme bravery in Germany. This makes Charles Byce, Canada’s most highly decorated Indigenous soldier of WWII. I understand that only 162 Canadians were awarded the Distinguished Conduct Medal during WWII and only 9 Canadians were awarded both medals as he was. It is also interesting to note that his father, Henry Byce, a hero in his own right, was one of those who also earned both medals. You can find a video of my statement on the legislature from September 15th on YouTube at https://goo.gl/eVCpYF

It was with honour that I joined RCL Br. 5, descendants of Charles Byce, the Ontario Native Education Counselling Association, and several other contributing groups in a ceremony to unveil a monument to acknowledge this man’s outstanding contribution and honour his memory. I want to encourage everyone to consider attending a Remembrance Day ceremony in your community on this November 11th.

In other news, in the Legislature this week I rose to make a statement on the matter of nuisance black bears in Northern Ontario. My office has noted an increase in the number of calls and letters received from constituents complaining that their property is being damaged, doors are being ripped off and even reports of bears climbing on the roofs of homes. Parents report they are afraid to let their children walk down lanes and roads to go to school or to school bus stops. Seniors experiencing even slightly limited mobility express fear to go for walks in backyards or parks for fear of getting trapped between a mother and her cubs.

Northerners are tired of receiving obvious advice such as keeping BBQs clean and garbage inaccessible when they call MNRF for help. Without out other viable alternatives at their disposal, people are being forced to adopt a strategy of “shoot-shovel and shut-up” is the result of this ineffective approach by the Liberal government.