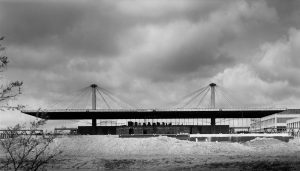 BAXTER LABS – Deerfield, Illinois. This cable supported roof structure won the American Iron & Steel Institute Award for Excellence in Steel Design in the U.S. in 1972. The design and construction were under the direction of Dr. Michael Hogan, P. Eng., while he was a member of the partnership of Skidmore, Owings & Merrill LLP (SOM), a major U.S. Architectural firm.

Was the building of the Nipigon River Bridge a waste of taxpayer monies in creating a “jewel of the north’. More show than form? Wawa-news has received information from a Professional Engineer who is very familiar with this type of structure, and in fact was the Structural Designer of world’s first Cable Stayed Post-Tensioned Steel Structure – Baxter Labs headquarters in Deerfield, Illinois. He is a Registered Professional Engineer in eight Canadian Provinces and a Life Member of Structural Engineers Association Of Illinois.

He begins by stating that this bridge is costing 5 times what it would cost if it were designed according to fundamental engineering principles. “These bridge spans are far too short for a cable-stayed bridge design. Ironically, these bridge spans are far longer than need be. See the photos of the train bridge and former highway bridge beside it (posted below). These designs were based on engineering fundamentals. The cables close to the expansion joint are a serious mistake and unnecessary because there is a bridge abutment there. They magnify the temperature lift forces.”

He questions, “Why are they there? For looks?”   Michael notes that there are no tie-downs. “There is no method of keeping this bridge from lifting in the cold weather. The longest cable, unrestrained, will contract 3” in a temperature change of 100 degrees F. Expansion joints are not tie-downs and they “lifted” 2′. 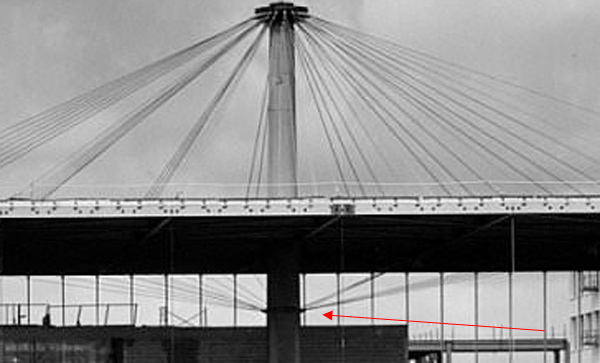 There are tie-downs under the roof to the mast and also tie downs in the mullions around the perimeter. Same as with an airplane: Always tie the wings down. We also pre-stressed these tie-downs to virtually eliminate the huge deflections (stresses) from the shrinkage of the cables in the cold weather.

In the photo above, of the tie-downs I used below the roof structure to prevent this. I didn’t invent this. The person who invented the umbrella did and I just copied it.”   Regarding the failure, “In addition to the 2′ “lift”, the expansion joint “twisted”. The north end “lifted” twice as much as the south end. This means the expansion joint “unbuttoned” – like ripping the buttons off a shirt from top to bottom. This puts tremendous loads on each bolt, progressively, one at a time. My “very rough calculation” suggests the 7/8″ diameter bolts had a strength of ~40,000 lbs each and the force created by the cold weather was ~600,000 lbs. or 15 times their capacity.”   It is concerning that he says “Media attention suggesting the cause of the failure was 40 defective anchor bolts, is a red herring across the trail.” 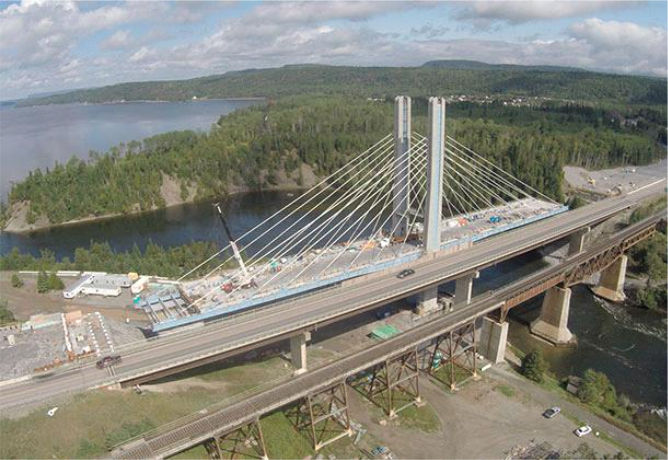 Notice the short spans on the old highway bridge and the railway bridge. That is fundamental structural engineering. Cost goes up roughly by the square of the span. The fish spawning problem could be solved by setting one pier on each side of the water- instead of just one pier for the cable-stayed bridge. He concludes, “There really is no place for a cable styed bridge in this situation – unless it’s for show ($106 million). We could easily span this river conventionally for $20 to $25 million. That’s about the cost of consultant and management fees for the cable stayed bridge. C’est dommage.”

I quote his explanation,

The bridge span that failed is only 113 meters (371 ft.), far too short for a cabled stayed bridge. The top 100 cable-stayed bridge spans in the world are all over 400 meters (1300 ft.) in length. The economical design for this bridge span is a box girder or truss. The cost of the span goes up roughly by the square of the distance spanned. It was not necessary to span 113 meters. Look at photos of the train bridge and former highway bridge beside it. They have much shorter spans. A rough rule of thumb is to put down as many piers as possible for economy. Our predecessor engineers did just that.

The fundamental purpose of the cable stays is to replace piers and reduce spans. This principle was not applied here. Two or three cable stays would have been effective, but eleven? Ridiculous! This makes the deck so light that it is no help in holding the bridge down when the weather gets cold and the cables shrink. So many cables close to the expansion joint greatly magnifies the temperature forces. Why is there a cable right over the expansion joint? There is a bridge abutment there to carry the end on the bridge (and hold it down).

There isn’t an ill wind that doesn’t blow some good. Bad design detail resulted in a favorable result.

The bridge spans are not symmetrical about the mast. West span is 113 m (371 ft.) and east span is 139 m (455 ft.). The cables for the longer east span do not go to the expansion joint and so it was spared the humiliation of the west span.

Does economics mean anything? This bridge is 5 times the cost of a conventional design – before repairs!

Did anybody think of twinning the highway bridge beside it?

Why did this design evolve this way? It comes down to the respective roles of Architect and Engineer. The Architect defines it. The Engineer makes it work. When it succeeds, the architect is a hero. When it fails, the engineer is to blame. Engineers were not always subordinate to Architects – for example, Sir Sandford Fleming and Sir Casmir Gzowski.

Michael concludes, “I don’t work for architects. Too dangerous.” 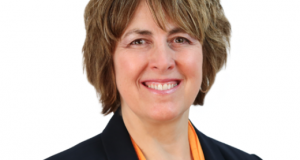