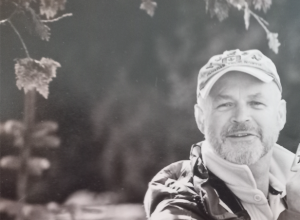 On Sunday, October 9th, 2022, the time arrived for Richard Albert Hector Marchand (RAHM), to allow his body a much needed rest. He left us, but his heart and spirit ever remain.

Born in Port Arthur (Thunder Bay), on August 5th, 1951, Richard chose to live his life in White River, a small, northern community, rich in natural beauty: wildlife, lakes, rivers, and forests. Richard never ceased to fill his days with the wonders of Mother Nature and bask in her beauty. Richard loved life and was passionately connected to the beauties therein.

His gift for growing flowers was the talk of the town. Usually, speed bumps slow traffic, but in White River, it was Richard’s voluminous, gorgeous, colour-filled flower garden that did the trick. Richard had a natural knack for seeing beyond, for seeing tiny intricacies and beauty. He captured these sights in his photos, evidence that will forever remain. Rare are such gifted artists who see so deeply and thus bring forth wonders for all to behold.

Richard loved Canada and its founding people, First Nations. He had tremendous admiration for them as they shared much in common, respect of nature and spirituality being foremost. Daily, Richard would describe in detail his experiences and sightings in the wild. Eagles, a symbol of love, friendship, honour, bravery, and mystic powers, visited him constantly as though they were kindred spirits. At night, Rick waited impatiently to enjoy the light of the moon, the protector and guardian of the earth.

Richard was a person who loved family, people, and his community. He was not only friends with Gil, Grant, and Wilfred; but also soul mates as they explored the wonders of the wild together. His family has a long history and deep roots in White River. Rick’s favourite number was “5”. Born on August 5, like his father, he was the last of 5 boys. His caring, giving, and funfilled nature facilitated him to fast become adopted family and dear friend to the Kozak’s, a family of 5 girls.

Richard took pride and joy in assisting and being of service to others. He took it upon himself to help his community and do such things as caring for the Saint Basil’s Church cemetery, sweeping the street in his area, and most recently being the church bell ringer. He readily shared his love and expert knowledge of the history of White River and the surrounding area by providing artifacts, photos, and information to the Historical Society and the museum.

Richard was an avid hockey player and at the age of 16 was looking forward to being scouted. Unfortunate circumstances occurred curtailing this passion. Working at the outdoor rink in White River and encouraging young people to pursue hockey interests brought him much joy as did grooming the cross-country ski trail and working on the White River canoe route.

Richard is predeceased by his father, Paul, mother, Eugenie and his brothers, Jerome, Ralph and Greg. He is survived by his forever loving partner and best friend, Julia Kozak, his brother, Larry and wife Donalda, their children, Elisa and David, and his brother Ralph’s children, Michelle, Paul and Greg. Richard will be genuinely missed but his caring heart and honest, loving nature will carry on and be remembered always. He was a rare diamond in the rough, truly precious.

In dreams, we walk with you, Richard!

A Celebration of Life service will take place this summer in White River on August 5th, 2023.