Do You have Ancestors buried in Michipicoten River Cemetery – can you help? 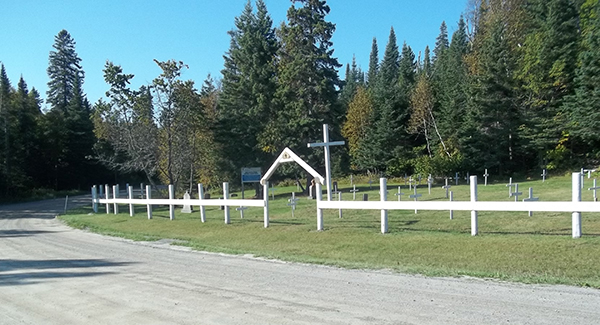 The local Cemetery Committee has embarked on a beautification project for local cemeteries, and the Heritage Committee would like to assist them with Michipicoten River Cemetery, situated just after crossing the Magpie River bridge over Silver Falls on the way to Michipicoten Harbour.

Michipicoten River Cemetery is a scenic graveyard perched on the north bank of the Michipicoten River and the Harbour Road not long after it crosses the Magpie River bridge over Silver Falls.  The Municipality of Wawa Cemetery Committee with the assistance of the municipality of Wawa Heritage Committee, is embarking on a cemetery beautification project.

The Michipicoten River cemetery itself was transcribed in 1983 by Kaireen and John Morrison, on behalf of the Ontario Genealogical Society of which Kaireen is a long-time member.  While it has been established that there are at least 100 burials in the cemetery, there are only 25 identified by headstones.  In 1984 an additional twelve names were confirmed but not their exact locations in the graveyard.  Over 60 gravesites remain unknown.

The hope is that if names of other families buried at the Michipicoten River Cemetery could be identified, even if we do not have the exact locations, it would be possible to create signage to acknowledge these Indigenous, Metis, European and mixed families who were all part of the rich early history in this area.

The earliest burial known in this cemetery seems to be one D. R.  Burgess (infant) in 1901.   Andrew Whitikane, a former Chief of the Michipicoten First Nation, at 101 would be the oldest.

The majority of the burial sites are marked by white crosses, known only to the families involved.  As time passes, families move away and this knowledge is lost.  Without written records available from the earliest years, we can only hope that people will assist us by contributing the names of their loved ones so that the families may be remembered with the respect they deserve.