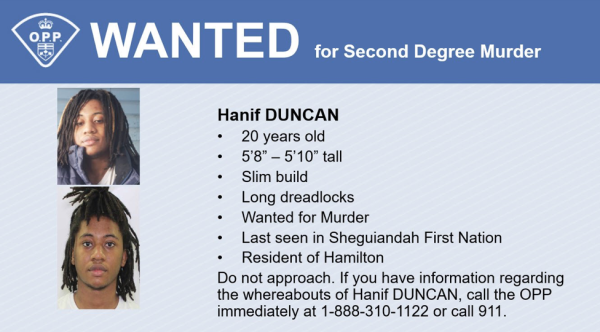 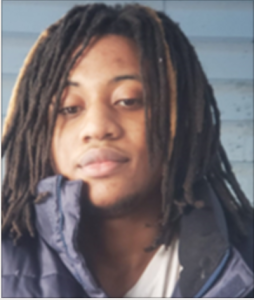 An arrest warrant has been issued after an individual, injured in a shooting incident in the Sheguiandah First Nation, died from their injuries.

On June 24, 2022, at approximately 11:45 p.m., the United Chiefs and Councils of Manitoulin Anishnaabe Police (UCCM) responded to a weapons complaint at an address on Wiingush Miikan. An injured 32-year-old male was transported by ambulance to a local hospital, where he later died from those injuries.

The deceased has been identified as Cheyenne Malcom ROY of Sheguiandah First Nation.

As a result of the investigation, an arrest warrant has been issued for Hanif DUNCAN, age 20, of Hamilton. DUNCAN is charged with Second Degree Murder, contrary to section 235(1) of the Criminal Code. He is described as black, between 5’8″ and 5’10” with a slim build and long dreadlocks. Photos are attached.

Investigators believe this was a targeted incident and there is no public safety risk. If you see Hanif DUNCAN, do not approach him. Call 911 or your local police service. The accused is encouraged to turn himself into police.

If anyone has further information regarding this incident or knows the whereabouts of the suspect, contact the OPP at 1-888-310-1122 or your nearest police service. Should you wish to remain anonymous you can call the Sudbury Rainbow Crime Stoppers at 1-800-222-TIPS (8477) or submit your tip online at www.sudburycrimestoppers.com