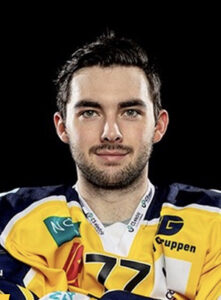 An important piece of the puzzle for the newly built defensive line-up of the Selber Wolfe hockey team is complete.
Ryker Killins, a Canadian from Wawa, Ontario, has made a commitment to play next year for the Selber Wolves in Selb, Germany.
Ryker played at the highest junior leagues in North America and three years of pro hockey experience in the ECHL. Most recently, Ryker played as a contingent D-Man in Denmark’s Metal Ligaen club. The 25-year-old is soon to receive his German passport. A formality that is decisive for the effectiveness of the contract.
Andrew Hare, Selber Wolfe Manager, explained “Ryker Killins has been on my watchlist since my time in Bietigheim (season 2019/2020). In my opinion, there is great potential in him. He is a strong skater and has very good skills. In addition, Ryker is said to have great character traits and has shown he is competent in adapting to new hockey systems. He brings a certain intensity into play. He is a tireless defender and always gives 100%. It is also important for us to have a right-wing shooter in defence. Equipped with a German passport, Ryker is a candidate for every DEL2 squad. I’m curious to see how he hits the DEL2 and I am very pleased that it worked out with the commitment of one of my desired candidates. Ryker was trained as an offensive defender in the highest young North American leagues, won various championships together with his teams, was elected several times in Allstar teams and was awarded Defender of the Year. He was awarded a four year scholarship and played D1 college hockey for Ferris State University. He was drafted to the ECHL where he started his professional hockey career. He made 111 appearances in the North American ECHL in three seasons. In addition, he can look back on 3 games in the second highest North American league, the AHL”.
When interviewed, Ryker stated, “I’m looking forward to the challenge. I am an offensive defender and flexible in both the power play and penalty kill. I am a good skater and can handle the puck quite well. In addition, I use my good shot as often as possible”.
The Canadian explains his desire to play for the Selber Wolves organization. “I had a good conversation with the Wolfes staff and received immediate support in applying for my German citizenship. Both my Grandfather and Great Grandfather were born in Germany. This allowed me to have dual citizenship and play hockey in Germany. It didn’t take me long to think about it. This is the best option for me personally and my pro hockey career path. I am looking forward to this new challenge. I can’t wait to move to Selb and get to know the people, my team mates, the city and my new neighbourhood. I have heard good things about Selb and the league and look forward to starting the new season”.
The goals for the coming season are already clear to Ryker. “I would like to help the team reach the playoffs and start a run to the final championship. Personally, I want to deliver a solid first season in Germany”.
The Selber Wolves wish Ryker Killins a successful and injury-free season 2022/2023.