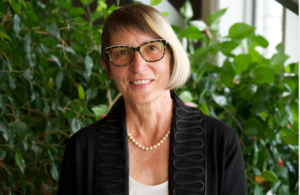 Linda Penner is the winner of the Orchestras Canada Betty Webster Award for 2021.
Linda Penner was nominated by the Thunder Bay Symphony Orchestra. The award announcement, delivered by video, celebrates her long-time contributions to the Thunder Bay Symphony Orchestra, the communities it serves, and the role she has played in sustaining the spirit and resilience of its musicians, staff, and volunteers.
The Betty Webster Award was established in 2002 to honour Orchestras Canada’s founding Executive Director. Past winners include distinguished musicians, volunteers, educators, ensembles, and arts managers: a tribute to Mrs. Webster’s inclusive vision for Canadian orchestras. Starting in 2021, the guidelines for the Award were refined to better celebrate Mrs. Webster’s legacy, by specifically honouring an individual who has made an under-recognized but sustained and significant contribution to the Canadian orchestral community through their work (paid or volunteer) with one or more Canadian orchestras. Additionally, in 2021, the jury focused on the calibre and impact of the nominees’ contributions to the resilience of one or more Canadian orchestras.
Linda Penner began her association with the TBSO in 1984 by joining the TBS Chorus. In 1999, in the midst of a severe financial crisis, Linda joined the TBSO Board of Directors. In addition to its monetary struggles, the TBSO was searching for both a new Music Director and General Manager. The orchestra was on the verge of collapse. With the assistance of an Interim Music Director, Linda took on governance and administration responsibilities well beyond the volunteer role that she had accepted.
The TBSO persevered, albeit with a long-standing and significant debt. After serving on the board for 17 years, Linda accepted the position of President in 2016. Today, the TBSO is debt-free and poised for the brightest of futures serving Thunder Bay and region – a tribute to Linda’s tireless perseverance, quiet insistence, belief in teamwork, the new initiatives she has championed, and engaging personal style.
In response to receiving the award, Linda Penner said:
“I am deeply touched and honoured to receive the Betty Webster Award from Orchestras Canada.
The TBSO and other similar organizations would not be here today were it not for the sustaining presence of Orchestras Canada. In concert with determined generous individuals who care deeply and commit to making a difference in communities such as Thunder Bay and across Canada, they help us achieve what we cannot do on our own. I wish to thank all those who throughout the darkest hours of our past and continuing into our present believe in the vision of giving life to music and music to lives. Together we ensure a bright and rich music-filled future with lifted spirits.
Thank you all from the bottom of my heart!”
The award includes a plaque and a donation to an orchestra of the winner’s choosing. Ms. Penner has asked that this year’s donation be directed to the Thunder Bay Symphony Orchestra.
The national jury was chaired by OC board member and Calgary Philharmonic Orchestra Director of Artistic Operations, Jennifer MacDonald, and included Daniel Mills (Executive Director, Kamloops Symphony); Anna Hewitt (Past President, Oakville Symphony); Eliot Britton (Composer; Assistant Professor, University of Toronto); Allegra Swanson (Executive Director, Music Nova Scotia; Orchestras Canada Board member); plus last year’s laureate and an honorary member of the jury Yannick Nézet-Séguin (Artistic Director and Principal Conductor, Orchestre Métropolitain, Music Director of the Philadelphia Orchestra and the Metropolitan Opera).
Speaking about the Award, jury chair Jennifer MacDonald noted, “Linda Penner’s long-time, quiet, determined and effective work on behalf of the Thunder Bay Symphony Orchestra deeply touched members of the jury for this year’s Betty Webster Award. We were unanimous in our appreciation for her accomplishments and for her selfless commitment to the TBSO over so many years.”
OC’s Executive Director, Katherine Carleton commented, “I have been a fan of the Thunder Bay Symphony Orchestra for many years. The TBSO serves Northwestern Ontario with thoughtful education programming, strong community partnerships, and undeniable artistic flair, and it’s such an honour for us to be able to recognize Linda Penner, who has played such an essential role in making this great work possible.”
SOURCE – Thunder Bay Symphony Orchestra