What do you think of the Marina? 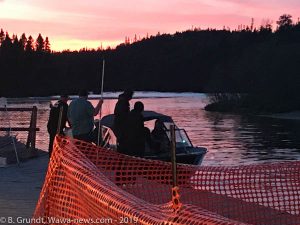 Anglers returning to the Marina during the 2019 Wawa Salmon Derby.

The Municipality has formed a Marina Advisory Committee comprised of Municipal Staff and members of the community of Wawa.

At the Marina Committee Meeting held March 3rd, 2021, many things were discussed, and the Committee would like to see what services will be available before discussing slip and boat launch fees for 2021. The 2021 Work Plan was discussed and some matters were also brought up: the river water flow, and measures to implement to keep sand on the far side of the island. The Committee also discussed a new boat ramp and a 2 sided-dock to be installed in the basin. All signs required for the boat ramp and dock would be installed if permission is granted.

One item that has been implemented is a survey to help the committee become aware of the community’s concerns, and desires about the Marina. That survey can be found here (link).

Members of the Marina Advisory Committee are:

There are three vacant positions for the following: Michipicoten First Nation rep, and MNRF rep.

Editor’s Note: Clifford Miller’s name was omitted from the list of members. Sincerest apologies. Clarification was given by Cathy Cyr.