Students have fun learning the letters of the alphabet

Junior and senior Kindergarten students at École Saint-Joseph (Wawa) are making great strides in their learning. The young friends in Mme Angèle Auger’s class are avid learners and have started learning the alphabet. In order to recognize, memorize and master the letters of the alphabet, Mme Auger organized “letter” workshops! These activities allow students to familiarize themselves with the concept of the letters of the alphabet while having fun!

When studying the letter “M”, the students took on the role of esthetician during a manicure session. It was a relaxing and fun activity!

For the letter “P”, the young learners were entitled to a pyjama day. They were lucky enough to go letter fishing and received a snack in the shape of a fish. What a beautiful day!

To learn the letter “Q”, the students played a game of bowling by practicing their letters and numbers!

Other activities are planned to ensure the learning of the other letters of the alphabet. The students are eager to learn other letters since, with Mme Angèle, all means of learning are good! 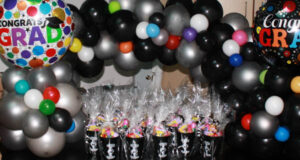