On October 23, 2020, at approximately 10:30 a.m., members of the Superior East Detachment of the Ontario Provincial Police (OPP) responded to a trespass call at a motel on Mission Road in Wawa.

Police were advised that motel staff had located an unpaid guest sleeping in one of their rooms. The accused fled the scene prior to police arrival but was located shortly thereafter.

As a result of the investigation, Keri SAYERS, 28 years-of-age, from Sault Ste Marie, was arrested and charged with the following: 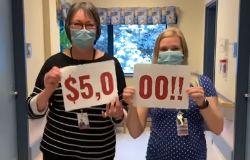