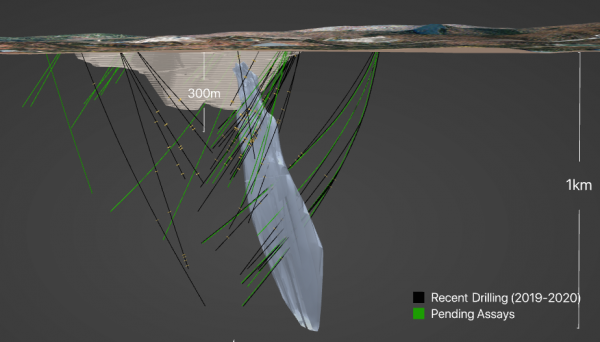 Argonaut Gold Inc. has announced results from the Phase Two of their current drill campaign. They are drilling below the proposed pit to further define possible ore zones. 54 diamond drill holes (34,852 metres of drilling) were completed in Phase 1 & Phase 2. “The Phase One program discovered a number of high-grade veins and Phase Two of the program utilized structural modeling from oriented core and optical televiewer measurements to focus on defining gold continuity. Pete Dougherty, President and CEO stated: “We continue to intersect high-grade gold and more importantly, we are seeing promising high-grade continuity within the Elbow Zone where we have now tightened drill spacing averaging between 40 metres and 50 metres in two areas.  We are anxiously awaiting results from Phase Two drilling in the Central Zone where, like results from the Elbow Zone, we continue to encounter visible gold.” 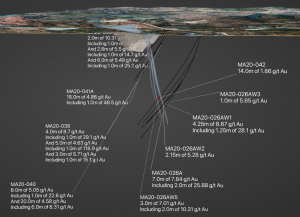 Brian Arkell, Vice President Exploration stated: “I’m very encouraged with the grade and continuity from an underground mining standpoint.  We’ve drilled a diamond pattern at approximately 30 to 50 metre spacing around MA19-016 from the Phase One program, which returned 14.0 metres at 9.63 g/t Au, and have consistently hit the zone with high-grade mineralization in each of the surrounding holes.  Approximately 450 metres below this, our second infill pattern around hole MA20-26 showed similar results with good grade and continuity.  We are finalizing a third pattern on the Elbow Zone and have shifted one drill to the Central Zone offsetting Phase One intercept MA19-012, which returned 18.1 metres of 8.31 g/t Au.  We are looking forward to receiving and publishing these results, as initial results indicate the Central Zone will demonstrate similar continuity based on what we see visually in the drill core.”

Last week, Argonaut Gold Inc. closed its previously announced “bought deal” public offering of 49,608,700 common shares of the Company at a price of C$2.55 per Common Share for aggregate gross proceeds of C$126,502,185. The net proceeds of the Offering will be used to for the advancement of the Company’s Magino Project and for general corporate purposes.