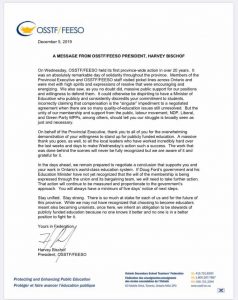 On Wednesday, OSSTF/FESSO held its first province-wide action in over 20 years. It was an absolutely remarkable day of solidarity throughout the province. Members of the provincial executive and OSSTF/FESSO staff visited picket lines across Ontario and were met with high spirits and expressions of resolve that were encouraging and energizing. We also saw, as you no doubt did, massive public support for our positions and willingness to defend them. It could otherwise be dispiriting to have a minister of education who publicly and consistently discredits your commitment to students, incorrectly claiming that compensation is the “singular” impediment to a negotiated agreement when there are so many quality-of-education issues still unresolved. But the unity of our membership and support from the public, labour movement, NDP, Liberal, and Green Party MPPs, among others, should tell you our struggle is broadly seen as just and necessary.

On behalf of the provincial executive, thank you to all of you for the overwhelming demonstration of your willingness to stand up for publicly funded education. A massive thank you goes, as well, to all the local leaders who have worked incredibly hard over the last weeks and days to make Wednesday’s action such a success. The work that was done behind the scenes will never be fully recognized but we are aware of it and grateful for it.

In the days ahead, we remain prepared to negotiate a conclusion that supports you and your work in Ontario’s world-class Education system. If Doug Ford’s government and his education minister have not yet recognized that the will of the membership is being expressed through the union and its bargaining team, we will need to take further action.

That action will continue to be measured and proportionate to the government’s approach. You will always have a minimum of five days’ notice of next steps.

Stay unified. Stay strong. There is so much at stake for each of us and for the future of this province. While we may not have recognized that choosing to become educators meant also becoming unionists, once here, we inherit an obligation to be stewards of publicly funded education because no one knows it better and no one is in a better position to fight for it.

Editor’s Note: Be aware that an edited version of this has been circulating on social media, carrying Harvey Bischof’s signature.