The NDP MPP for Sudbury, Jamie West, blasted the Ford government during question period Tuesday for suggesting that the current state of treacherous and poorly maintained winter roads in northern Ontario is good enough for Northerners.

“The Auditor General showed us that the Liberals saved $36 million by cutting the monitoring of the plowing,” Fedeli wrote on social media. “MTO has made enhanced public information a priority. Public messaging includes driving according to road and weather conditions.”

That’s awful for families in the North to hear, according to West.

“People are white-knuckled on unplowed, icy highways, and it’s even scarier when it’s your kids out there,” said West. “Families don’t want to hear about the dollars supposedly saved by making us less safe. And families sure as heck don’t want to hear that the priority is ‘enhanced public information.’ Northern families want and deserve enhanced snow plowing and road safety.”

Conservative MPP Aris Babikian (Scarborough—Agincourt) gave some insight into why the Ford Conservatives voted against the NDP bill, telling the legislature it could cost ‘taxpayers a great deal of money without substantial benefits.’

“It seems the Ford Conservatives don’t believe that the safety of northern Ontario drivers is worth the money,” said West. 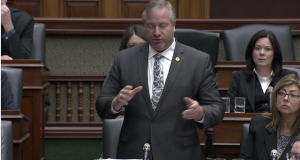