Have you seen Steven Leblanc of Elliot Lake? 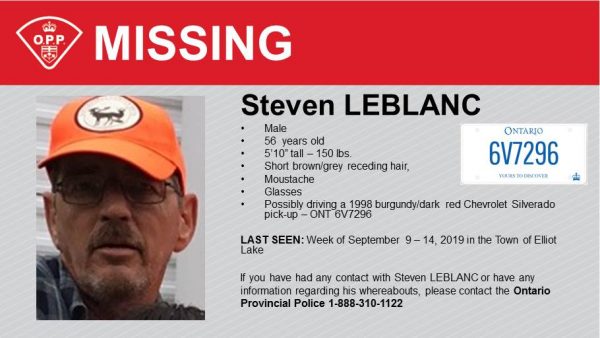 On September 16, 2019, members of the Ontario Provincial Police (OPP) Elliot Lake Detachment responded to a report of a missing male from the Elliot Lake, Ontario area.

OPP Investigation has revealed that Steven LEBLANC, a 56 year old male had not been heard from since the first week of September, 2019. He is described as white, approximately 5′ 10″ tall, slim build, 150 pounds, short brown/grey receding hair, brown eyes, and a moustache. LEBLANC’s vehicle is a 1998 burgundy/dark red Chevrolet Silverado pick-up truck with Ontario marker 6V7296.

Police and family are concerned for his well-being and are asking the public’s help to locate him. Anyone with information or may know the whereabouts of Steven LEBLANC is urged to contact the OPP at 1-888-310-1122 or their nearest police authority.